Ultimately I would like to automate the process of generating clusters from points (representing buildings and amenities within a neighbourhood), and placing points at street intersections which are nearest the centres of the clusters. The data would imported from OSM, which represent buildings, amenities and other desired data. I am not sure which workflow is best, of QGIS, FME, or with Python (or a combination of).

The simplified workflow would be as follows;

Another thing I would like to implement is an option to toggle OSM tags to be included in the points, such as amenity or tourism, but I'm not sure how to implement that as well.

So far I have been using mostly FME (and QGIS to generate shape boundary of the neighbourhood to test). My current issues are that I am not sure how to implement a looping system and counting system, as well as isolating each section in a grid. I have used NeighborhoodAggregator, but I am struggling a bit with counting points in each section of a grid, and I find that there is no way to move the grid around, and I don't know if it's possible to do a for loop. 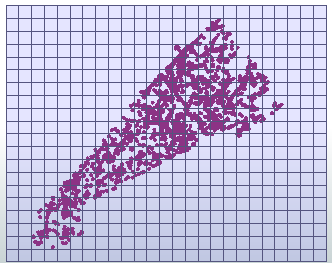 If there is a better set of components to use in FME, or if this task is better suited to either QGIS or with Python, then I would be interested to know.

I am new to spatial analysis, and I have used FME because I have heard it is good for cleaning data regarding spatial analysis. The reason I ask is that while I have started this project using FME, I have noticed questions regarding automation being asked in the context of QGIS.

Interesting question. In FME, there are often multiple transformers that can carry out a certain task, and that is true here. The PointOnAreaOverlayer transformer is the most obvious one, but you can also get similar results with the Clipper, the SpatialFilter, or the SpatialRelator.

As to looping and moving the grid... well, there are two methods there too. Either you add a loop to your workspace (it has to be inside a custom transformer) or you use a two-workspace solution, where a parent workspace moves the grid and passes it on to the child workspace to process.

I'd go with the second option. I think looping inside a single workspace is fairly complex for a new user to try. The other way is better. You should be able to find examples in articles on the FME Community (community.safe.com) of how it works.

Having said all that, are you sure that this is the best method of creating clustering information? I don't think I've seen it done like that before. I think FME is probably the best solution to the steps you've outlined, but a true GIS tool like QGIS might have spatial clustering functionality built directly into it.

2
Convert CSV files into OSM with FME
3
Displaying intersection from FME LineOnAreaOverlayer transformer in FMEViewer and ArcMap is different?
4
Huge x,y,z dataset into oracle, possible?
2
Spatial join between point files using FME
2
Batch create fishnet using FME
7
Shortest Path Analysis with Turns in FME?
3
Is there FME transformer to snap point on point of nearest line?
4
How to set up future-proof line labels for data that is regularly updated?
1
Building CityGMLs with OSM, OSM2World and FME