GDAL and Python: How to get coordinates for all cells having a specific value?

I've got an Arc/Info Binary Grid---specifically, an ArcGIS flow accumulation raster---and I'd like to identify all cells having a specific value (or in a range of values). Ultimately, I'd like a shapefile of points representing these cells.

I can use QGIS to open the hdr.adf and get this result, the workflow is:

This approach "does the job", but it doesn't appeal to me because it creates 2 files I have to delete, then I have to remove unwanted record(s) from the shapefile of centroids (i.e. those = 0).

An existing question approaches this subject, but it's tailored for ArcGIS/ArcPy, and I'd like to stay in the FOSS space.

Does anyone have an existing GDAL/Python recipe/script that interrogates a raster's cell values, and when a target value---or a value in a target range---is found, a record is added to a shapefile? This would not only avoid the UI interaction, but it would create a clean result in a single pass.

I took a shot at it by working against one of Chris Garrard's presentations, but raster work isn't in my wheelhouse and I don't want to clutter the question with my weak code.

Should anyone want the exact dataset to play with, I put it here as a .zip.

[Edit Notes] Leaving this behind for posterity. See comment exchanges with om_henners. Basically the x/y (row/column) values were flipped. The original answer had this line:

When I first encountered the issue illustrated in the screenshot, I wondered if I implemented the geometry incorrectly, and I experimented by flipping the x/y coordinate values in this line:

However that didn't work. And I didn't think to try flipping the values in om_henners' Numpy expression, believing wrongly that flipping them at either line was equivalent. I think the real issue relates to the x_size and y_size values, respectively 30 and -30, which are applied when the row and column indices are used to calculate point coordinates for the cells.

@om_henners, I'm trying your solution, in concert with a couple recipies for making point shapefiles using ogr (invisibleroads.com, Chris Garrard), but I'm having an issue where the points are appearing as if reflected across a line passing through 315/135-degrees.

Light blue points: created by my QGIS approach, above

Purple points: created by the GDAL/OGR py code, below 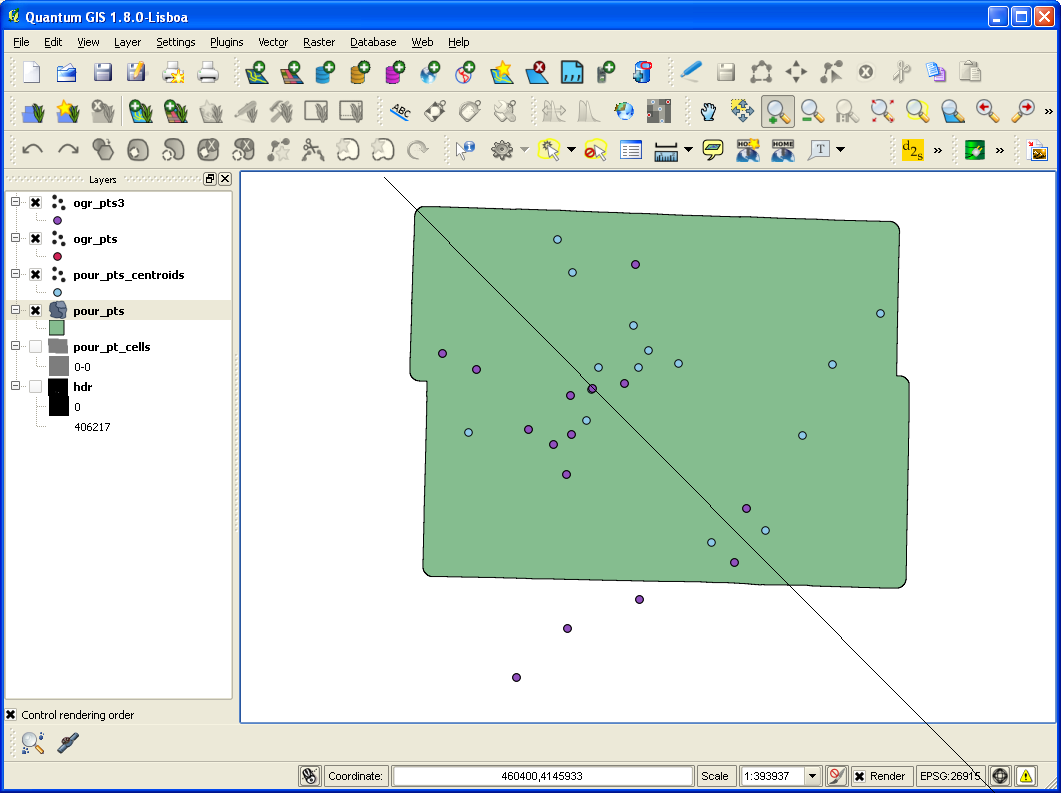 This Python code implements the complete solution as proposed by @om_henners. I've tested it and it works. Thanks man!

In GDAL you can import the raster as a numpy array.

Then using numpy it is a simple matter to get the indexes of an array matching a boolan expression:

From the raster geotransform we can get information such as the upper left x and y coordinates and the cell sizes.

The upper left cell corresponds to a[0, 0]. The Y size will always be negative, so using the x and y indices you can calculate the coordinates of each cell based on the indexes.

From here it's a simple enough matter to create a shapefile using OGR. For some sample code see this question for how to generate a new dataset with point information.

Why not use the Sexante toolbox in QGIS? It's kind of like the Model Builder for ArcGIS. That way, you can chain operations and treat it as one operation. You can automate the deletion of intermediate files and removal of unwanted records if I'm not mistaken.

It may be helpful to import the data to postgis (with raster support) and use the functions there. This tutorial may have elements you need.

Not the answer you're looking for? Browse other questions tagged python raster gdal or ask your own question.

16
How to get X Y coordinates and cell value of each pixel in a raster using Python?
16
Generating GeoJSON with Python
5
Finding the pixel coordinates using GDAL/numpy
3
Creating point shapefile from GeoTIFF using GDAL/OGR?
1
How to center the QGIS map on the maximum value of a raster?
0
GDAL data - change top left coordinate

6
XYZ Clustering in Python and numpy arrays
3
(How) can I write string data to a raster with Python/GDAL?
12
Image processing using Python, GDAL and Scikit-Image
1
Build a table with columns of raster values from multiple raster datasets, using Python, GDAL, or PyQGIS?
2
How can I alter the value field in a raster?
1
Raster to CSV with x y cell center coordinates, the original raster cell value, and values from another raster avoiding shapefile
1
Assign values to a subset of cells of a raster
2
Updating a subset of raster values using open source Python?