Is there a way to choose the field delimiter when exporting a CSV with geometry as wkt in QGIS?

I have a shapefile with donut holes and I'd like to export it as a CSV. It's for a partner whose DB doesn't support spatial data.

I followed Greg Krakow's methodology to add a WKT field to my exported file (when exporting to csv, add GEOMETRY=AS_WKT in the "Layer" field, but the exported field delimiter is a comma:

Does anyone know if I can choose my field delimited when exporting to CSV? Choose a semicolon for instance?

I search on the web and QGIS's documentation but didn't find anything.

I was able to export to CSV, using other than a comma, by separating the layer creation options in the Save As.. dialog with linebreaks.

Neither comma, nor space-separating them (even when they were in quotes) worked, but the linebreaks did the trick. To emphasize..

But these approaches did NOT work...

(quoted, and either space or comma-separated LCOs):

As @underdark noted, there are some additional options discussed on the OGR CSV driver page you may want to be aware of. Specifically, the SEPARATOR parameter will accept either SEMICOLON or TAB in addition to COMMA. Also, you may want to experiment with the LINEFORMAT parameter, which supports either CRLF (dos/windows) or LF (unix).

A picture says a thousand words, so here's a screen grab. :) 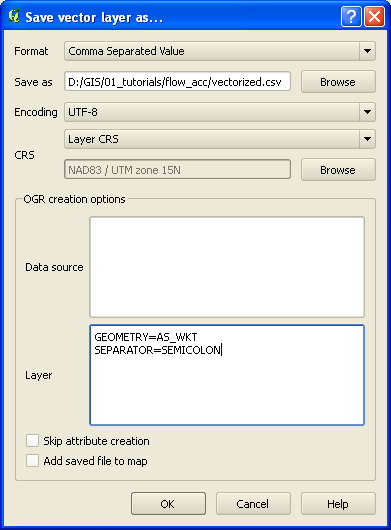 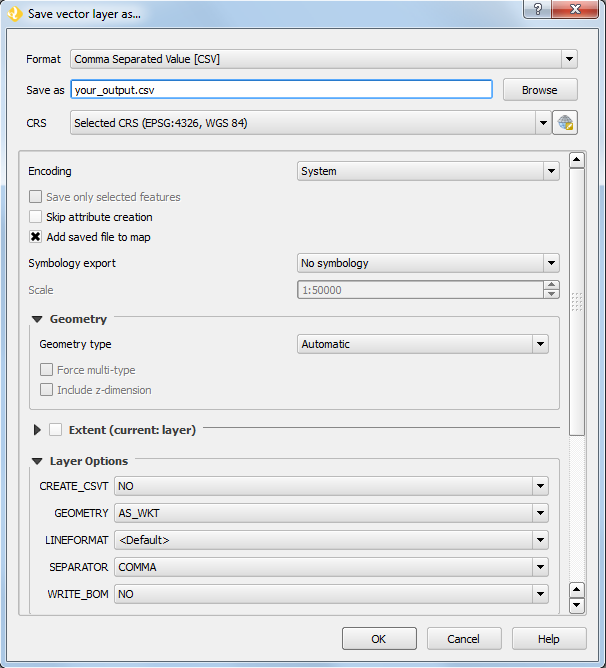 Not the answer you're looking for? Browse other questions tagged qgis export csv well-known-text or ask your own question.

1
How to extract geo data out of a polygon shapefile into CSV KWT
19
How to export Polygons to CSV with coordinates?
12
Writing vector layer to CSV file with geometry using PyQGIS?
3
export shp positions to csv pyqgis

7
Is there a limit to the number of polygon points you can export to CSV in QGIS 2.4?
2
QGIS 2.2.0 Valmiera
1
Exporting from Excel to csv and import in QGIS retaining encoding/special characters (with workaround)?
2
QGIS How to draw lines from two points in a CSV?
5
QGIS add CSV - only shows 2 points on map
3
export shp positions to csv pyqgis
2
Joining table with multiple-values-field in QGIS
5
Exporting result of QGIS model to CSV
1
CSV projection not aligned with QGIS OSMap
3
Changing the default comma separator for CSV files in QGIS