Using Make Feature Layer from URL with token in ArcPy

The above code works fine for most URLs but doesn't work for secured connections. We access secured connections using tokens. I can add the layer manually on ArcGIS by adding data from path (URL) as in the case in the image below. 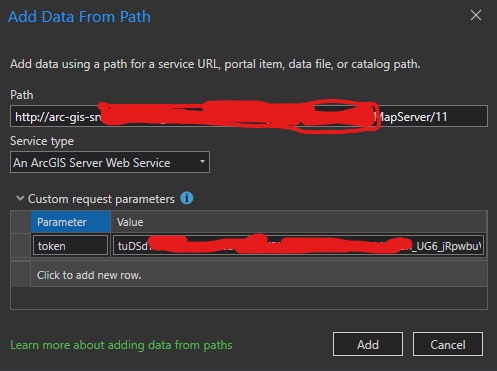 I noticed that the token needs to be passed as a parameter but can't figure out a way to do this. I've tried

The code above still doesn't work. It doesn't throw an error and runs for a very long time and I have to cancel it.

How can I pass the token as a parameter in the code?

A possible solution (untested) is to add the layer to a map in ArcGIS Pro, so its all working then save that as a Layer File by right clicking on the layer in the Contents pane >Sharing > Save as Layer File then reference that in your script. I just don't know if this works for secured layers.

Not the answer you're looking for? Browse other questions tagged arcpy arcgis-pro layers wfs authentication or ask your own question.