Using Attribute Rules to Pull in Attribution from Another Feature Class

I could use some assistance creating a calculation that just simply pulls attribution from a field in one feature class, and populates the edited result into another feature class's table. For example:

We have a streets layer named 'Streets' with a field [StreetName]. When that table gets edited, the result should ideally just get updated in the other layer named 'New_Streets', but in a field called [NAME]. If these fields are in the same table - it works okay using this code:

I would like to be able to do this using two layers in the same geodatabase.

You have not provided enough detail about the relationship of your layer Streets to New_Streets, thus I have to make an assumption that New_Streets is a copy of Streets. I say this as the solution I offer below requires a one-to-one match with the ObjectID field, so row 1000 in Streets is the same street as row 1000 in New_Streets.

So your data should look as below:

For this attribute rule to work you need to set an immediate calculation to trigger on UPDATE for the Street layer. I show the setting of the rule below: 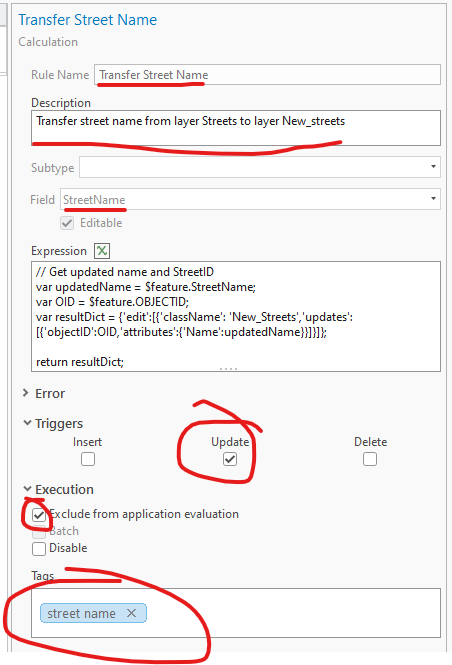 The expression is this:

Note: for some reason I had to enable GlobalID for it to work.

Not the answer you're looking for? Browse other questions tagged arcgis-pro attribute-table arcade attribute-rules or ask your own question.

0
Changing feature from one feature class to another using ArcGIS Pro?
0
Rounding numbers in a Python Label Expression
3
Combining rows in attribute tables in QGIS 3.4 with some strings that should be added together and others left untouched
0
Return values to multiple fields — using an Arcade calculation attribute rule in ArcGIS Pro
1
ArcGIS Pro Attribute Rule to pass a value from child to parent