I'd like to ask whether there is a way to read greek fonts in a shapefile's attribute table within QGIS 1.8.0.

You might try creating a file with the same base name as the shapefile but with a .cpg extension, containing a single line of text identifying the encoding, be it UTF-8 or something else. I am not sure if this will resolve the problem with QGIS, but I have had some success with this method to force multi-byte characters in attribute data to be interpreted correctly (typically in situations where attribute data was written in an encoding incompatible with the code page given in the DBF file header's LDID field).

Update 1: Just to illustrate that QGIS does respond to the presence of .cpg files, here is an attribute table screenshot of two identical test shapefiles. The only difference is that attrb has an attrb.cpg file declaring UTF-8. In this case, the Unicode test characters are rendered correctly. 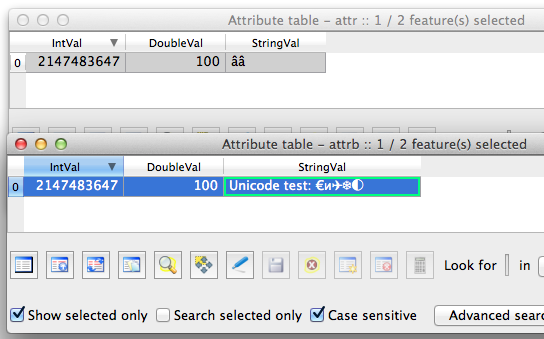 Both shapefiles have 87 as the value of the Language Driver ID (LDID) byte in the DBF header, indicating ISO-8859-1 encoding. Thus, at least in this case, providing a .cpg allows the user to override the internally-declared encoding without actually modifying or re-saving the DBF file.

Update 2: I downloaded a sample shapefile from the page Andre suggested (thanks!). As you can see, by default the fields containing Greek text do appeared garbled:

I then created a file named nomoi_okxe.cpg in the same directory as the shapefile, containing the text 1253 (the Windows code page number for Greek). I then reopened the shapefile in QGIS: 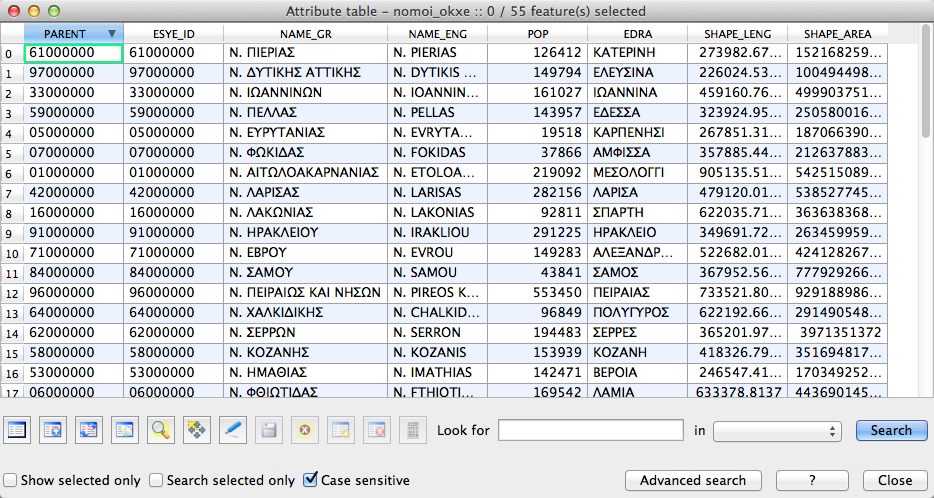 That looks Greek to me!

ZISIS, is this sample shapefile representative of the files you need to work with?

SOLUTION A for utf-8 encoded shapefiles

Supposed you are working on Windows, look for qgis.bat in bin directory, and open it with a text editor. after the first line, insert

and save. Qgis 1.8.0 has some problems with encoding, using your computers default font instead of the one you specify. It is fixed in Qgis Master (1.9.0) by now, which you can install with osgeo4w setup.

SOLUTION B for ISO-8859-7 encoded shapefiles

It works on the cited shapefile only with Qgis Master (1.9.0):

In Settings -> Options -> General, there is a checkbox

With this option shapefile encoding is done the same way as in Qgis 1.7.4, that is leaving it to QGIS and not GDAL.

If you want to work on with QGIS Lisboa, save the shapefile as UTF-8 and proceed with Solution A, until the next stable version of QGIS is released.

create a file named < filename >.cpg and 1253 as content in the same folder as the shapefile.

convert the shapefile with ogr2ogr:

This allows GDAL to encode ISO-8859-7 on reading, and writes UTF-8. Unfortunately, writing to shp in one step does not work the same way. You can use the GML or the utf.shapefile with Solution A.

This should be possible if you open the layer preferences, to to General and set the encoding to UTF-8.

Edit: Use OpenOffice to open the dbf, set the encoding to UTF-8 and then hit save. You may need to add and delete a letter to get the save-option.

Not the answer you're looking for? Browse other questions tagged qgis shapefile encoding font greece or ask your own question.

3
How to fix encoding problems with Turkish characters?
10
How to display special German characters "ÄÜÖß" in a map?
4
Does QGIS support internationalization?
2
Accented characters in csv file appear as '?' when importing to QGIS
2
Encoding Greek alphabet with ArcGIS for Desktop?
-1
Several letters missing in QGIS 3.0.3
0
Find and replace with Greek letters returns question mark in ArcGis 10.3

1
How to Join Attributes by Location in QGIS 1.8.0
6
After performing table join all the fields are "NULL" in QGIS
1
How to access shapefile table in QGIS Modeler R scripts?
1
Labeling places using local fonts like Singhala and Tamil fonts in ArcMap or QGIS?
5
How to read font family name in QGIS?
0
Merging/Compressing attributes in a single vector shapefile QGIS