How can I solve “The Network Analyst solver could not determine a solution”? 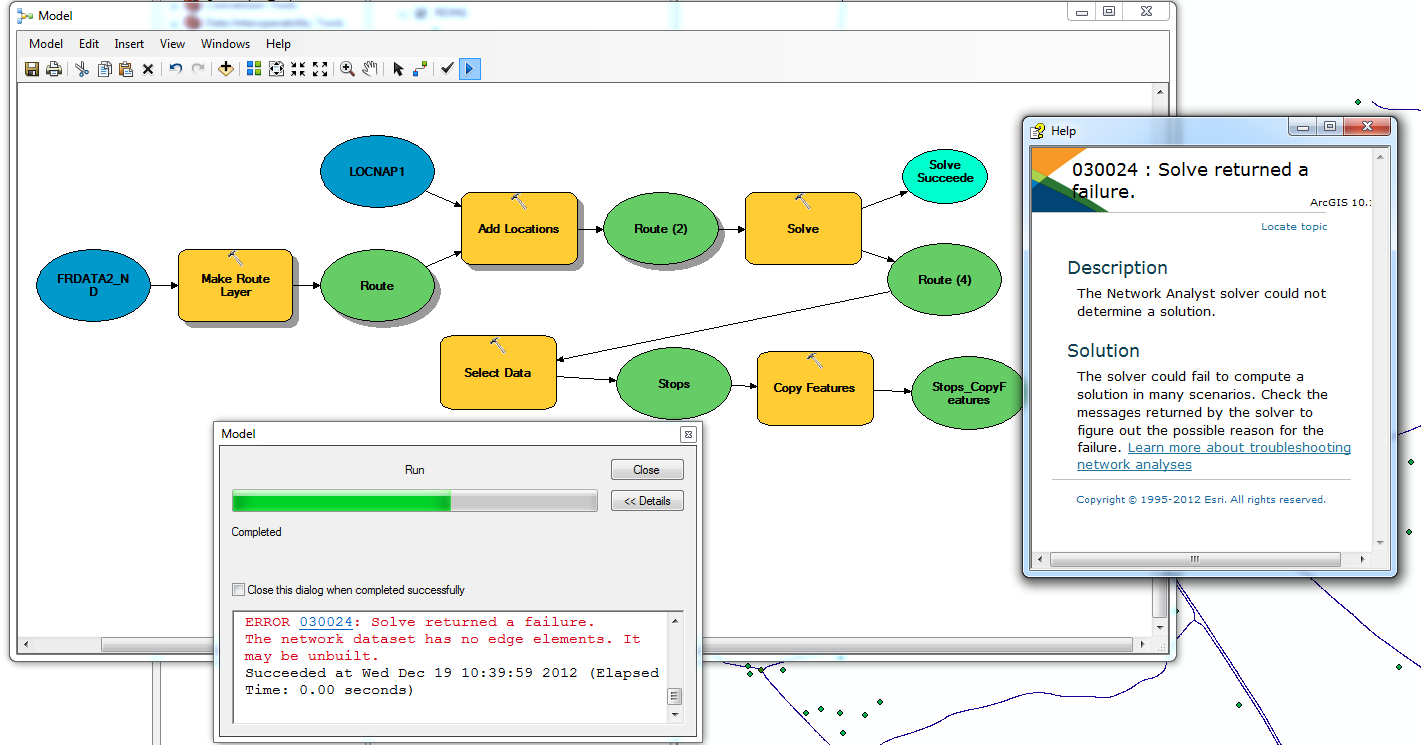 I have network data for undulated terrain so there are lots of inaccessible parts of the network. When I was using this model, I get "The Network Analyst solver could not determine a solution" error. I'm not aware how to solve this error. I have attached an example image to show the problem.

I am looking for your guidance. Thanks in advance.

As the error says, you have problems with the network dataset itself not the Route layer or solving the model. I'd try several things:

2) Create a new file geodatabase with a new feature dataset. Use the Feature Class to Feature Class GP tool to convert the Streets feature class. Build a new network dataset there just to test it would work in a "fresh" environment.

4) If the network has no edges perhaps it needs to be "built". Did you build the network dataset before using it (can be done in Catalog window of ArcMap or ArcCatalog)

5) I've seen this issue once with the proper network dataset - the problem gone away after installing SP3 for 10.0. Do you have SP3? If nothing helps, could be a good time to update maybe to the latest SP (SP5).

6) Also keep in mind that if the network dataset has none of the edges available then the stops you load have basically no place (no link) where they could snap to. Therefore you will need to re-load them and re-calculate their locations once the edges are in place.

Since you have lots of inaccessible parts of the network in your network dataset, consider using the query builder (Route Analysis layer properties window > Network Locations tab) to exlude locating on certain edges.

Not the answer you're looking for? Browse other questions tagged arcgis-10.0 modelbuilder error network-analyst or ask your own question.

0
How can I hide custom model from mytoolbox in ArcGIS
2
Arcpy Network Analyst solver error
3
How to prepare automatic text labelling for legend using ArcMap?
2
How to do Network Kernel Density Estimation Analysis in ArcGIS for Desktop?
1
Can you create a square OD Cost Matrix with Network Analyst?
2
Exporting Network Analyst layer objects (orders, routes, etc) created in Python after solve?
1
Creating Toolbox for ArcGIS that calculates route for maximum of 6 given addresses?
0
Travel entire streets segments