I have a geodatabase table with a field that I'm trying to remove return characters (new line). I found this post (How can I remove (chomp) a newline in Python?) of how to do it, however it is not working within field calculator. Here are the code snippets that I tried: Note return character is not at the end of the string.

Description The calculation used by the Calculate Field or Calculate Value tool is invalid. This error message provided will list the specific Python error.

Solution This error code covers a number of Python errors:

Example error 1: exceptions.TypeError: cannot concatenate 'str' and 'int' objects. The above is a Python-specific error. The calculation is attempting to add or concatenate a string and a number.

Any ideas of how to remove return characters using field calculator?

I think this is just a bug/limitation of the Python parser with the field calculator/Calculate Field tool. If a newline is encountered within the text field, a SyntaxError: EOL while scanning string literal occurs no matter what you try.

I can reproduce the issue at 10.1 SP1 by importing the following CSV file into a file geodatabase, adding a field and simply attempting to copy the Text field to the new field using the Field Calculator with the Python parser and and the expression !Text!.

Try switching to the VB parser, or using an UpdateCursor and avoiding the Field Calculator entirely.

This issue is also discussed on the ESRI forums, with the same conclusions:

The only relevant NIM I could find was this:

Field calculator is a bit confused when it comes to escape sequences like \n and \t. Just use the raw character codes.

There's two possible solutions I've found to be reliable. For some reason CartoPac allows people to put a Return in the REMARKS field where I work. To get rid of those, the solution that I've found to work best is using the Field Calculator.

Change your Parser to Python. Put the following in Pre-Logic Script Code:

Put the following in the next text box (this one is working on a field called REMARKS): 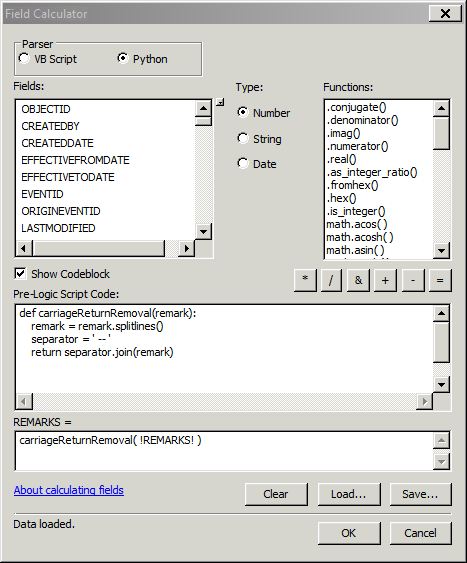 When your carriage returns get removed, it will add a space, --, and a space between each line. You can modify " -- " to a different character or set of characters if you'd like. But I've found this to work best for me based on the way my construction crews enter data. It is easier to do Find/Replace operations if there are recognizable character patterns breaking up each carriage return, which they use in the field to denote a new attribute (even though it is often an attribute they could've just put into the proper field and saved me the headache in the first place).

You may or may not need to run the import lines below before attempting the code example above:

The work around for this since my feature class table originated in excel was to use the following excel command:

method to remove all return or new line characters. You can then join or import the table into your GIS database.

I've used a SQL statement to first select the new line characters. In the Select By Attributes dialog window:

You have to press Enter after the first %.

I think this should work as Pre-logic Script Code in the Field Calculator - but unfortunately it seems not to. I've posted it anyway in case it gives you an alternative approach you can tweak to get working.

Try wrapping your !field! declaration in the expression with quotes and a raw string initializer, e.g. r"!field!".

Not the answer you're looking for? Browse other questions tagged arcgis-desktop arcgis-10.0 field-calculator python-parser error-000539 or ask your own question.

1
Is there an inbuilt arcpy method to insert a new line?
2
Using defined function code block with Python in ArcGIS
2
Arcmap record value is not displaying entirely
0
Strip html tags from ArcMap table