Most recently, for example, QGIS could not reinstall due to the following package dependencies.

The strange thing for me is that more up-to-date versions of the dependent packages already seem to be on my machine, based on the above warning.

I know the simple answer to this question is "use 1.8.0 if you cannot sort your dependencies out", and this is precisely what I've done for now - (see very useful answers here if you need to fix broken packages).

However, I really like using some of QGIS's new features such as the new labelling engine and would also like to contribute to the development process by submitting up-to-date bug reports.

So if anyone has faced similar issues and knows of a reliable way to keep abreast with all QGIS 1.9 dependencies, please let me know.

Thanks to lynx for the tip to ask on the IRC channel, there one of the developers (NathanW) suggested installing from source directly.

The advantage of this method is that there is no chance package dependencies can get mixed-up. Assuming you're running linux with apt, all necessary packages (excluding ccmake) can be reliably installed with a single command (described here):

Once these packages are installed, it's plain sailing: you just clone the latest Github version onto your system with the following command:

Because github is where most updates are added directly, this method ensures you're getting the bleeding edge version. Also, you choose where the binary goes, so I guess it allows multiple versions to co-exist. The Ubuntu-gis solution suggested by Curlew should work in theory, but I've found it unreliable...

All the install from source instructions, including how to install Master on Windows and other operating systems can be found here (the this is just the html file linked to previously loaded to dropbox).

Following these instructions is, I believe, the most reliable way to get the latest version of qgis on your system. Here's a screen grab from my system: 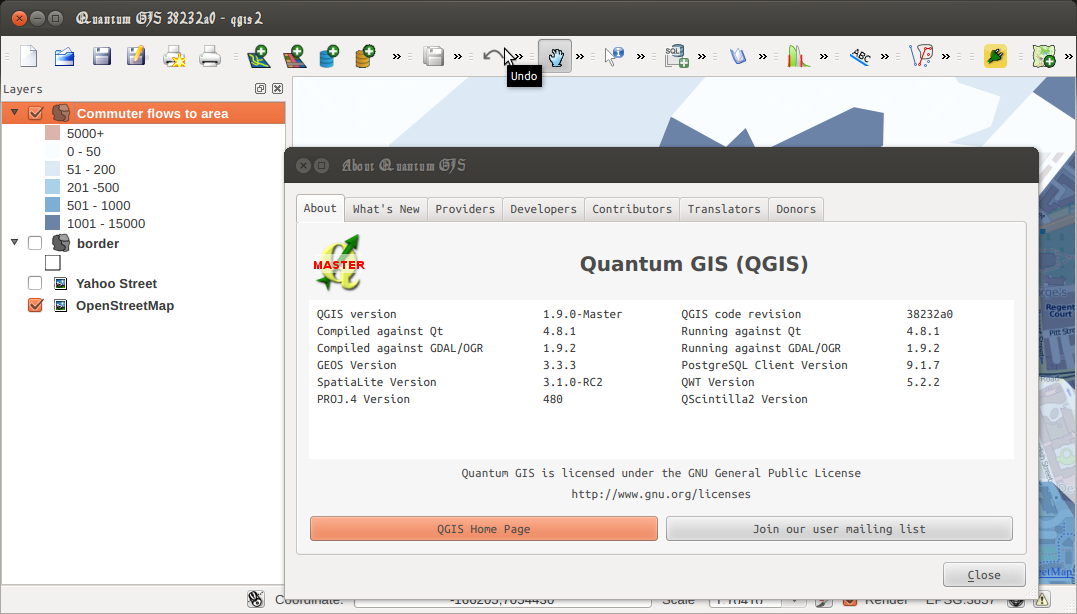 Many thanks to the qgis developers for making such an excellent piece of software, while also being supportive to the community. Hope to contribute to the project more now, by testing and bug reports. Any suggestions on that welcome, but probably way off topic by now. Apologies for long reply to my own question. Still learning all this stuff!

You can find sources with updated dependencies on the QGIS download page. If possible try to add the official repositories to your sources. Also look into other posts here on stackexchange (look to the right).

If it still doesn't work, you should go the usual way with broken dependencies (correct them piece by piece, try different sources, create symnlinks for packages or just compile QGIS yourself. It isn't really hard.).

2
How to fix QGIS PyQGIS package?