Spatial analysis and clustering near features

Im working on marking behaviour in group living animals and im interested in how marking behaviour is affected by certain characteristics of the neighbouring groups. I have plotted the territories of each group from 95% density isopleths created using a-LoCoH. The marks of each individual from a group are plotted as a separate points layer. Marking behaviour does not appear to be random, and they do seem to cluster around boundaries with neighbouring groups. What I would like to investigate whether individuals mark more near some groups than near others, for example, do individuals mark less near groups that are closely related? is it possible to show that points are clustering near some features but not near others?

Any help that can be provided would be greatly appreciated,

For demonstration, below is an image of four territories (A,B,C, and D) and the marking locations of two individuals from group A. Groups A and B are closely related. Groups C and D are unrelated to group A. 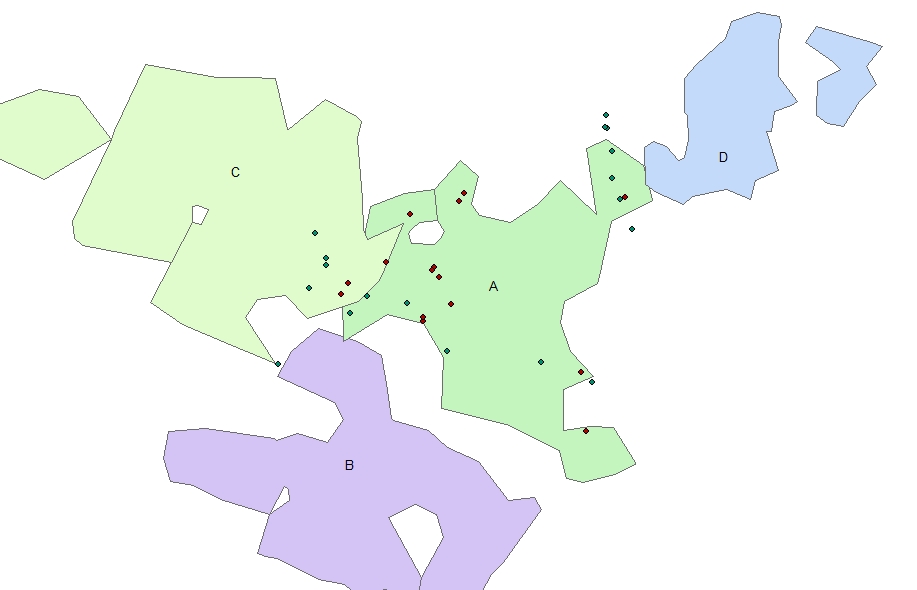 I'd strongly recommend taking a look at R, in particular the spatstat package from CSRIO. There's an excellent manual/tutorial by Prof. Adrian Baddeley available which will take you through a host of different methods for point pattern analysis. Particulraly I'd take a look at the Part VII: Marked Point Patterns (specifically the Mark correlation function on page 202). Note marks here refer to data being classified by an attribute instead of having a numerical relationship.

There's also a chapter on reading data in (using rgdal, sp etc.) at the beginning of the document. If you're using ArcGIS I'd take a look at the Geospatial Modelling Environment as one way to link between data in R and ArcGIS, otherwise QGIS has manageR which will do the same.

Lastly @whuber (among many others) here on GIS SE has a huge amount of experinece in R, so ask questions as you find them or try and grab him in the chat.