How to create an error map to support an average kernel density map?

I've created an average kernel density map by running KDEs on points stacked within the same spatial extent. For example, say we have three point shapefiles representing seedlings in three different forest gaps of the same shape and size. I ran a KDE for each point shapefile. The output from the KDE were then stacked based on spatial extent in order to calculate the average in Arc's raster calculator, for example: Float(("KDE1"+"KDE2"+"KDE3")/3). Here is the final product: 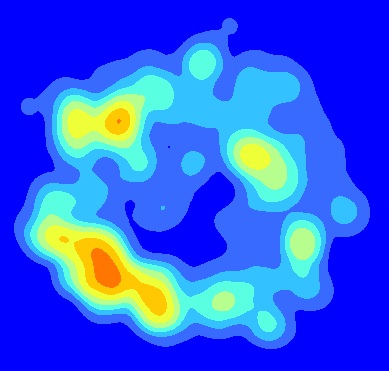 A standard error is a useful way to estimate an uncertainty from sampled data when there is no systematic error in the data. That assumption is of dubious validity in this context, because (a) the KDE maps will locally have definite errors that may persist systematically among the layers and (b) a potentially huge component of uncertainty due to the choice of kernel radius (or "bandwidth") will not be reflected at all in any one given collection of these maps.

Nevertheless, portraying the variability among a collection of related, collocated ("stacked") maps is a great idea--provided you remember the limitations just described. Several measures of local variability would be natural in this setting, including:

In many respects, the multiplicative measures may be more appropriate for densities, because the difference between (say) 100 and 101 trees per acre may be inconsequential whereas the difference between 2 and 1 trees per acre could be relatively important. Both exhibit the same (additive) range of 101 - 100 = 2 - 1 = 1, but their multiplicative ranges of 1.01 and 2.00 differ substantially. (Notice that a multiplicative range always exceeds 1, so that 2.00 is one hundred times further from 1 than 1.01 is.)

Computing these measures requires some form of local statistics. The cell statistics functionality in Spatial Analyst will compute the variances, ranges, and standard deviations. The local quantiles can be found with rank. Rather than being fussy about which ranks to use, pick convenient ones near the quartiles. To find them, let n be the number of grids in the stack. The median has a rank of (n+1)/2--which might not be a whole number, indicating it should be computed by averaging the n/2 and n/2 + 1 ranks, either of which would approximate the median. To approximate the quartiles, then, round (n+1)/2 down to the nearest whole number, then again add 1 and divide by 2. Let this number be r. Use r and n + 1 - r for the ranks of the quartiles.

Not the answer you're looking for? Browse other questions tagged arcgis-desktop spatial-statistics kernel-density or ask your own question.