What is the best way of converting a value from irregularly shaped poylgons to a polygon grid using PostGIS? I have a set of polygons that look like this: 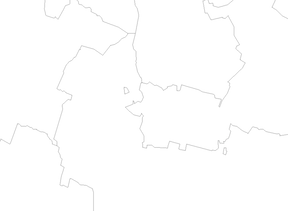 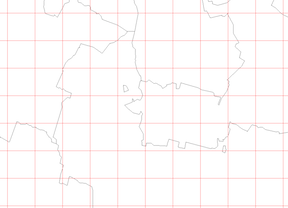 My approach for doing this is as follows. Assuming each polygon has a value X_i and an area A_i, I calculate the density using D_i = X_i / A_i. Then, for each gridcell, I multiply the fraction of the polygon area that intersects that gridcell by the appropriate density value. I think this approach is satisfactory but I have not figured out a way of abstracting it so that it is easier for me to do this regularly.

There are two approaches: vector-based and raster-based. The former is more accurate, and the later is generally faster but much more complicated.

Use the fraction of area overlap between each polygon and grid cell to weight the values. Say you have a grid (e.g. created this way), and an irregular poly with values in val. To determine val on grid:

The idea behind this method is if you rasterise values from an irregular polygon, you get the values. However, the rasterisation methods are limited, as they don't consider the area fraction of polygons within each pixel. So you will need to modify this approach by rasterising at a finer resolution than desired, then generalise the refined raster to the desired resolution. The accuracy of this method increases with a finer initial raster resolution.

I can add more details to this method, but it is much more complicated. I did this approach first with gdal_rasterize with files in a shell, then I moved the logic to GDAL/Python using gdal.RasterizeLayer.

Not the answer you're looking for? Browse other questions tagged postgis vector-grid or ask your own question.

72
Creating regular polygon grid in PostGIS
13
GDAL RasterizeLayer does not Burn All Polygons to Raster?
5
Area-weighted rasterising of polygon data

4
Postgis Grid Points on Boundary Issue
6
How to create a valid global polygon grid in PostGIS?
2
Adding values to Fishnet Grid?
3
Methods for converting a regular polygon grid to a numpy array
1
How to assign the attributes of the largest overlapping polygon area to each overlapping gridcell?
2
Calculating partial distances from whole segment in grid using QGIS?
1
Different number of grid cells between years when using a grid layer to look at area of land cover change over time
0
Splitting up polygon with grid using QGIS
2
R fractional area calculations using the exactextractr package