Output of QGIS raster clipper not as expected?

My goal is to clip a raster with a polygon in QGIS 1.8. Based on an article I read, this should be a pretty straightforward task. However, the output appears to be empty. The raster produced is the same size as the original. The metadata for the output raster shows that it is the same extent as the original, with the same pixel size, same number of bands, but there is no information about the content of the bands.

I've attached a screenshot of the parameters I am using for the clip. I have done this two other ways, all with similar results. The first is with the NoData value set to 32767, which is the same as the NoData value of the input raster. The second is with 'Create an output alpha band' checked, which creates a 2-band raster that is otherwise identical to the output described above.

I would very much appreciate it if someone could critique my parameters, and suggest what I might be doing wrong. 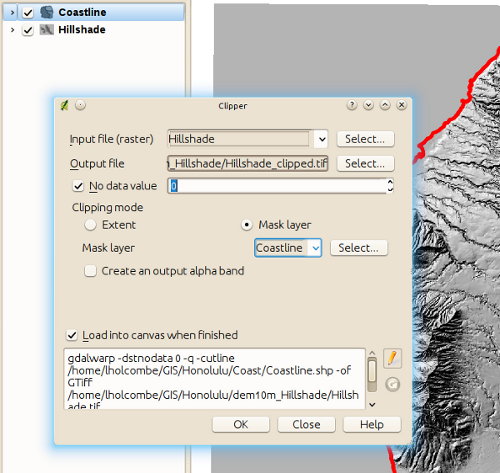 Make sure that vector and raster layer have the same CRS, and their extent should have reasonable and matching values.

Both should be saved to the file system, because layers build in memory (like ASCII and CSV files) don't have a CRS saved to disk. Even if you specified it under Settings -> Options, CRS Tab, you should not be prompted for a CRS if loading them to the project.

Turn On-the-fly-reprojection OFF and see if the two layers align. If not, the external GDAL clipper function will not work.