Summing up over area based on distance related function?

Through a field study, we learned that the density of a bird species in the forest was related to the distance to forest edge: ln(density) = 1.89*(distance to edge) + 0.34

Now, for any forest polygon, how can we estimate the number of birds in it based on above equation?

I thought of using raster approach, dividing the forest into many grids, calculating, and summing up.

But as the forest polygons are highly irregular in shape, there are many "incomplete" polygons. The size of the grid cell and the origin of the grid system influence the output as well. I wonder if there is any approach to this problem using polygons directly?

The raster approach is the way to go. There's some information missing, though: your formula needs to indicate what the units of measurement are. Birds per square meter? Per acre? And what is the distance--meters, feet, yards, etc.?

Let's assume you know the units and know how to manage unit conversions. Then you only need to divide the forest polygons into small cells, obtain the distance of each cell to the forest edge, apply the formula for density, convert the density to a count via multiplication by each cell's area, and sum these counts within each polygon.

In detail, the steps are

Begin with a forest polygon layer: 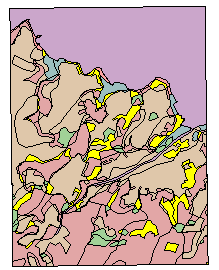 The yellow features are forested.

If you're worried about the effects of grid origin and cellsize, repeat this calculation while varying those parameters and study the variation in the output. A formula like this is so rough an approximation anyway that considerable variation should be tolerable; given that, and assuming the forest polygons are not extremely tortuous, I would expect the values to be acceptably constant once each polygon has a few dozen cells or more inside it. One reason for this expectation is that the greatest densities (whence the greatest relative contributions to population estimates) are found along the medial axes of the forest polygons and these loci ought to be represented with reasonable accuracy as soon as the polygons are dissected into multiple cells in all directions. (The medial axes will be visually apparent as ridges in the Euclidean distance grid computed in Step 3.)

The raster approach will tend to be much more efficient: simply create a distance raster from the polygon edge, and then use map algebra in the raster calculator with your equation. You may need to experiment with the cell size.

Not the answer you're looking for? Browse other questions tagged arcgis-desktop polygon density or ask your own question.

7
Summing Attributes from a Related Table?
0
Point to point distance over specified distance
1
Maximum distance between two related shapefiles
0
Interpolating over time based on distance in R?
2
Summing Area of polygons within vector layer within zone using QGIS?