How do I add a Corel Draw map as .dxf file to QGIS and how do I georeference it?

I have a vector data map of Poland, which I exported from Corel Draw. I can display the map in QGIS. At first the boundaries and subdivisions are only displayed as lines, after saving the data as shapefile, I was able to use the "Line to Polygon"-tool to convert the lines. Now I have a shapefile with multiple features.

Now I want to relocate and distort it to make it fit to my basemap. As you can see in the picture, the Poland shapefile is presented close to Africa because the location is not yet defined correctly. 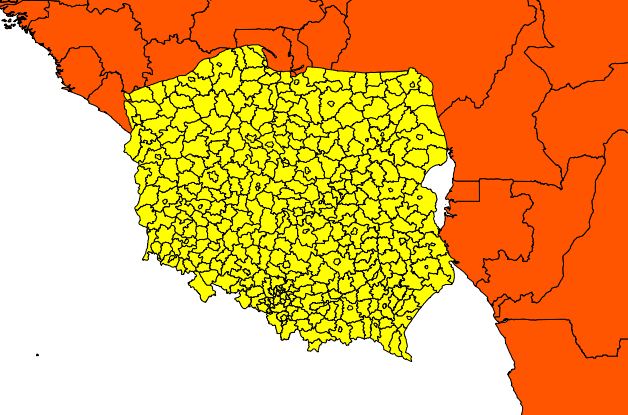 There are now several problems:

As you can see, there may be a mistake in the previous steps but I dont know where, I already repeated every step but there is still no solution found. I suspect the problem to be in the step of converting the Corel Draw .dxf file to a shapefile or the transformation from lines to polygons.

Also if you know a more effective way to get my map to its planned location and how to reference it correctly, please let me know your thoughts.

Here you have shp files with admin division of Poland in WGS84 http://www.filefactory.com/file/6alk9nislrwb/n/POL_adm_zip

5
QGIS - How to add a geometry to an existing feature that has NULL geometry?
1
Get data from WFS and present in using d3js - correct projection
5
How to draw weighted voronoi polygons (thiessen) from points in QGIS?
17
Convert a line to polygon
5
How can I use QGIS to create a metro style map
1
Convert EPSG:3347 into EPSG:4326; nothing worked
1
How to draw polygons in leaflet using x and y coordinates instead of lat lng?