I'm trying to figure out how to mathematically derive the common points of two intersecting circles on earth's surface given a center Lat/Lon and a radius for each point.

It would be trivially easy to solve this on a flat plane but I don't have any experience solving equations on an imperfect sphere such as the earth' surface.

It's not much harder on the sphere than on the plane, once you recognize that

Consequently, the problem is reduced to intersecting a line with a sphere, which is easy. 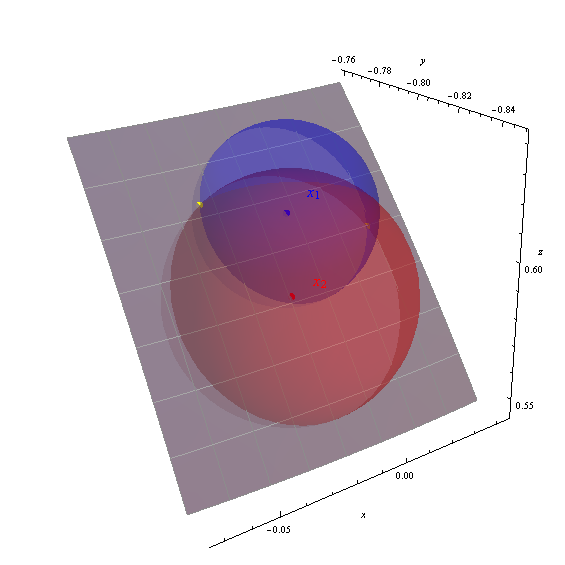 The axes display the geocentric (x,y,z) coordinates. The gray patch is the portion of the earth's surface from -95 to -87 degrees longitude, 33 to 40 degrees latitude (marked off with a one degree graticule). The earth's surface has been made partly transparent to show all three spheres. The correctness of the computed solutions is evident by how the yellow points sit at the intersections of the spheres.

This problem is a generalization of the one of finding maritime boundaries defined as "median lines" and there's an extensive literature on this topic. My solution to this problem is to leverage the equidistant azimuthal projection:

This algorithm converges quadratically and yields an accurate solution on an ellipsoid. (Accuracy is required in the case of maritime boundaries, since it determines the fishing, oil, and mineral rights.)

Formulas are given in Section 14 of Geodesics on an ellipsoid of revolution. The ellipsoidal equidistant azimuthal projection is provided by GeographicLib. A MATLAB version is available at Geodesic projections for an ellipsoid.

Here is some R code to do this:

Following from @whuber's answer, here's some Java code which is useful for two reasons:

It's not optimised or complete (I've left out obvious classes like Point), but should do the trick.

Also, importantly, note the use of atan2 - it's the reverse of what you'd expect from @whuber's answer (I don't know why, but it works):

Thanks a lot @whuber for your brilliant work! Hereby I share the python code which I typed based on your work, in case it might help someone.

Any feedback is appreciated.

If one of circle is the Nortstar, then there is a easiest way with unit sphere.

You can measure your latitude with Nortstar. Then you have a relative position on this sphere. v1(0,sin(la),cos(la)) You know the position(angle) of the another star (star2), from almanach. v2(sin(lo2)*cos(la2),sin(la2), cos(lo2)*cos(la2)) Its vectors. From equation of sphere.

lo2 is the relative longitude. Its unknow.

After all you add the real longitude of star2 to lo2. (or sub, depend on its on west side from you, or east.) lo2 now is your longitude.

Sorry for my english, i never learn this language.

Another. Because the angle measured to horizont relatively, always need 90-angle correction . Its valid to m angle too.

Not the answer you're looking for? Browse other questions tagged point intersection gis-principle spherical-geometry mathematics or ask your own question.

1
Computing intersection of distance circles around fixed points
557
Measuring accuracy of latitude and longitude?
15
How to find ring of coverage of GPS Satellite on WGS-84 ellipsoid?
7
locating latitude-longitude point in a piste-map with matrix transforms
5
Plotting points that have relative coordinates rather than total station coordinates on map?
5
Finding Intersection of Two Circle given Lat/Lon and radius?
1
Lat Long line intersecting with circle
1
Bilateration using longitude, latitude
1
Calculate an intersection point of multiple spheres on the surface of earth
1
Drawing a Satellites Coverage FootPrint on an OpenLayers Vector Layer
See more linked questions