How to extract coordinates & elevations of boundary cells of DEM?

I am using a 50mx50m grid irregular shaped DEM file.

I have to work on the boundary conditions.

How do i extract the cell locations ( in x,y coordinate ) along the boundary edge and consequently find the elevation of the respective boundary cells.

This question asks for two things: (1) identify the boundary cells and (2) "find" their elevations. Although "find" could be interpreted in many ways (do you want an output table of elevations? A DEM containing only those cells? etc.), doing it is straightforward once you have solved (1), especially if the boundary cells have been represented as an indicator grid: this is a grid that has one kind of value at the desired cells and another value at all other cells. Depending on the follow-on analysis, a 1-0 indicator or a 1-NoData indicator usually work best (and either is converted into the other using SetNull and IsNull).

The problem is thereby reduced to efficiently computing an indicator grid for the boundary cells. If we characterize a boundary cell as one that is adjacent to at least one NoData cell (where "NoData" includes hypothetical cells that would lie beyond the edges of the grid itself), then the solution evidently requires a "focal" or neighborhood operation. One way is to turn the DEM itself into a 1-0 indicator; this can be done with Not and IsNull. Then a focal sum of this indicator will be less than the neighborhood size exactly where there are zeros in the neighborhood: these would be all boundary cells and all original NoData cells.

To summarize, an efficient raster-based workflow to create an indicator grid of all boundary cells starting from a DEM is given by this pseudocode:

As an example, here is a corner of a much larger DEM, shown hillshaded: 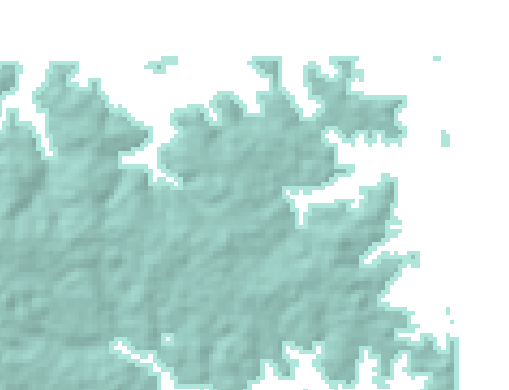 Its indicator i is constantly 1 where the DEM has values, shown here as gray: 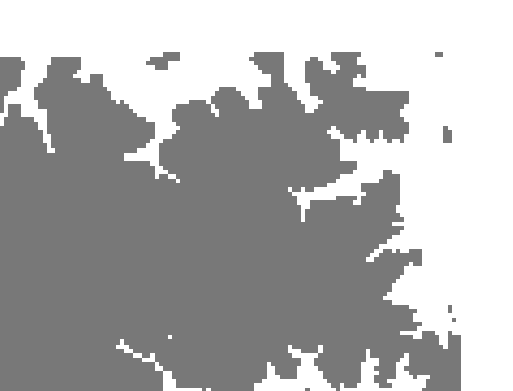 The focal sum of i, using a 3 by 3 neighborhood, can have values between 0 and 9, shown on this temperature-like map (graduating from red for 0 through greens and blues and finally becoming transparent for the maximum value of 9, revealing the gray from i itself): 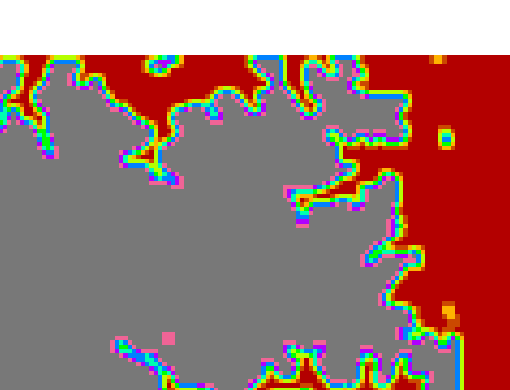 You can see that all the action is around the perimeter, as it should be. Overlaying those cells that are less than 9 with the indicator i shows the cells that are part of the DEM and on its border, exhibited here in red overlaid on the original DEM: 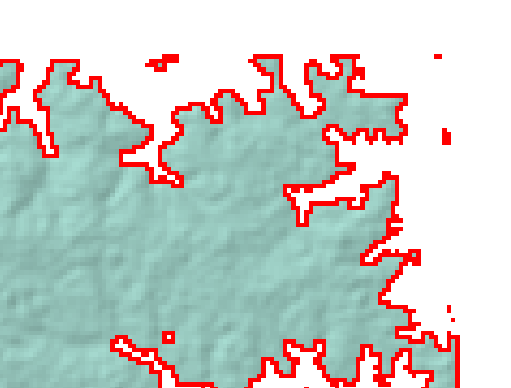 (Notice that the border in this case includes an internal cell that was missing a value: it's near the center bottom.)

This procedure involves just five grid operations (Not, IsNull, FocalSum, <, and &), all of which are very fast to execute. Thus, even if the ultimate intention is to output a table of values or a point shapefile or some other non-raster representation of the boundary cell values, it will be easier and computationally much more efficient to get to this point using raster operations before converting to another representation.

Not the answer you're looking for? Browse other questions tagged arcgis-desktop dem arcgis-9.3 or ask your own question.

2
Creating basic DEM file with flat geometry in ArcGIS Desktop?
1
How to create 10m DEM from 30m DEM?
2
Finding average elevations from a Raster DEM, applying those to Vector Grid created with GME
1
How does Resampling raster work at corner cells?
1
Extract all pixels from a finer DEM into a coarser fishnet in each grid box in arcgis
1
Finding xy coordinates of high and low elevation values in DEM
1
Working with SRTM DEM that has rectangular cells?