We recently walked a fence perimeter with a Trimble Ranger, auto-logging positions at 5 second intervals in a generic point file. The exported file acknowledges over 800 points, but only displays the specifically recorded points (far fewer than 800). Is it possible to access the internally logged points and convert/display them as features in Arc?

My apologies if this is common knowledge, I've had no luck in over an hour of browsing forums. Thanks in advance for any help.

It's easy to confuse positions and actual points which are different things. Positions are logged to a single point, which are then averaged to produce the final location of a point. If you recorded a bunch of positions that followed a fenceline into a single point you'll probably have some trouble getting those into the format you wanted. This is done because the position reported from the GPS receiver drifts every time it is updated, due to lots of factors, which are the subject of a whole other post. The GIS software then takes all of the positions you record for a point and essentially averages them into a final point location. Here's a relatively crude attempt to display this graphically. This is why it's always a good idea to collect a large number of positions for every point - the higher the sample size the more 'accurate' the final position. (Sidebar: If you plotted the drift of your unit for each position reported, after a while you'd have a cluster that has a diameter approximate to the reported 'accuracy' of your unit. ie-3 meters.) 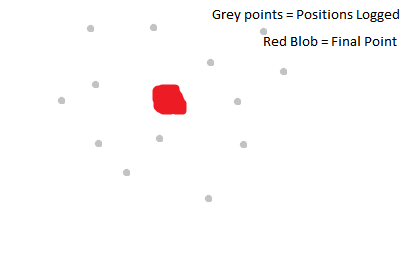 As @Mapperz mentioned you can use the Trimble GPS Analyst extension to view the individual positions you logged, but you will probably have to convert them into points manually as (to the best of my knowledge) you cannot directly convert positions into points.

A better data collection strategy would be to record a line or polygon feature with your Trimble. That would convert each position into a vertex along the line or polygon boundary and result in a feature that showed each position you recorded without having to use special extensions to get into you data.

Trimble makes a dedicated software package for this (other than Trimble GPS Analyst), Pathfinder Office, which will let you do this and lots of other things with your Trimble files. Contact your Trimble rep (if you bought the unit from them) and they may be able to hook you up with a free or discounted copy.

You can export positions that aren't part of a feature (like yours) to a shapefile by checking the "Include Not In Feature Positions" box during export: 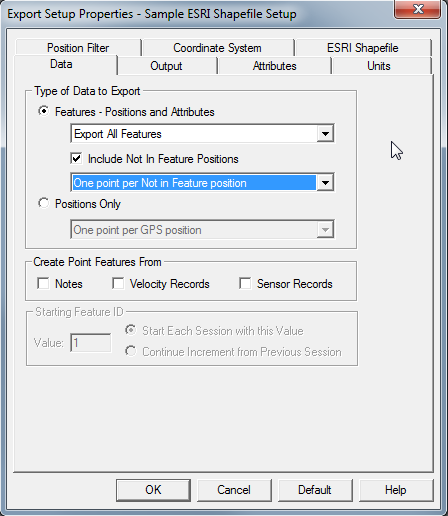 Not the answer you're looking for? Browse other questions tagged arcgis-10.0 arcmap gps trimble or ask your own question.