How do you take a vector layer with overlapping polygons and turn it into a raster where each cell counts the number of polygons containing that cell?

We are looking at polygons of fire burn areas between 1976 to 2000 and want to see how many fires would be contained in each raster cell.

Do this in three steps: break the polygons into their component parts, count the overlaps, and convert to raster. This avoids the potentially huge computational cost of separately converting every polygon to a raster and combining those rasters.

For example, here are some overlapping polygons and their identifiers with the attribute table shown:

After the second step we have one record for each overlapping region along with a count which can already be used to symbolize the amount of overlap: 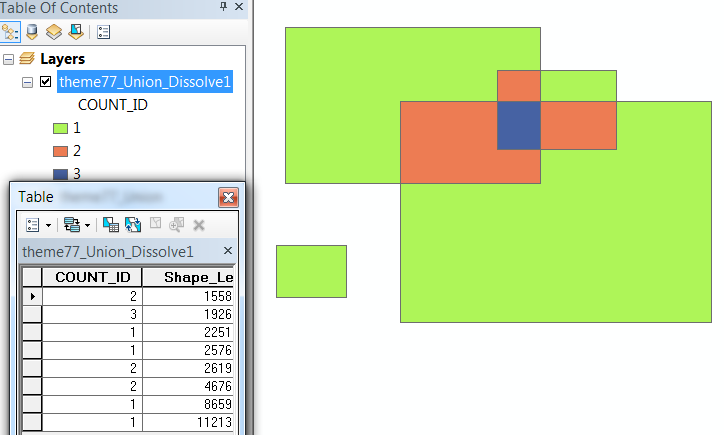 The rest is easy--and it's just a single rasterization operation.

The following post has a somewhat similar question that you could find a related solution: Creating a raster surface of overlaps from vector polygon shapefiles?.

For this computationally fast and simple raster approach, you will need to (1) separate the overlapping polygons into separate layers (presumably by year for fire polygons) using Select By Attributes in ModelBuilder with an iterator or a script tool, (2) convert each Polygon to Raster with the MAXIMUM_COMBINED_AREA cell assignment (ensuring same cell size, snap raster, and that the extent remains the same as the entire set of polygons) - using a constant field value (e.g. use the year field or rows that have all 1s) to convert on (again use ModelBuilder with an iterator or Python script to help automate), and then (3) apply the following Spatial Analyst tool: Cell Statistics - use the statistics_type VARIETY if each raster has a unique value such as the year or SUM if all rasters cell values are 1s - be sure to check to ignore NoData.

The intermediate rasters (from the prior conversion) may be deleted or are ready to be used in subsequent raster analyses.

Not the answer you're looking for? Browse other questions tagged arcgis-desktop arcgis-10.0 raster overlapping-features or ask your own question.