Is there a built in function or simple set of steps that calculates the area of each feature of a polygon layer within a specific extent? What we want to do is calculate the area inside a set of bounds for each of the polygon layer’s features that reside within those bounds (defined by minimum and maximum X and Y). This process would be repeated multiple times, as we traverse a grid. Ideally, the function would also return the area not occupied by any features.

For example, consider this polygon layer in which there are 3 polygons (red, blue, and geen): 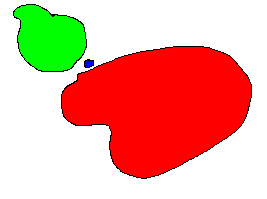 If we imagine splitting that layer into a grid: 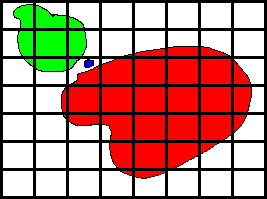 Looking exclusively at one cell of the grid: 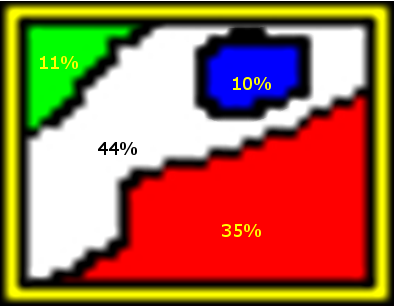 Note: these percents are for demonstration purposes only and are not necessarily to scale.

We'd also like to keep in mind the case of overlapping polygons. Consider this alternate polygon layer in which the blue polygon resides entirely within the red polygon: 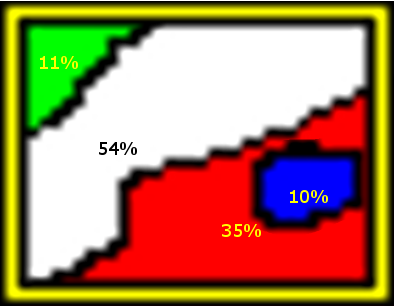 In this case, the sum of the area covered by each polygon would be greater than the area covered by the grid cell. As shown in the illustration above, red and blue both occupy the same percentage area as in the first example, but their areas are not distinct. In this case we would need to receive the values adding up to 110%, or a new set of percentages along the lines of:

If a function exists that performs the calculations described above, we would need to know exactly what the result of that calculation gives us.

Our current thought is to follow the workflow below, but we wanted to see if anyone had better ideas.

I realize that this an answer to an older thread but if you've upgraded to 10.1, check out the Tabulate Intersections tool in the Analysis toolbox (ArcInfo level).

Not the answer you're looking for? Browse other questions tagged arcgis-10.0 arcobjects c# polygon area or ask your own question.

0
Find extent of data inside many polygons