I have recently been looking at airlines web pages that display their routes departing a certain city to all other cities they service. I would like to be able to create similar curved routes between points. Has anyone created scripts or functions that will generate the curved arcs like those displayed in this example? 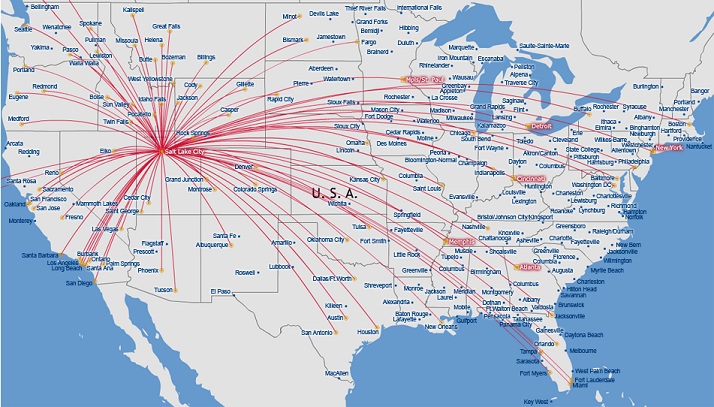 In PostGIS, is there an implementation of the ST_MakeLine that would allow you to specify the amount of curve to use when connecting 2 points?

While I am currently using PostGIS and QGIS, I would welcome hearing about other software options that might be able to create the same appearance.

Creating great circles could give you the desired effect.

I've followed up on this idea in "Visualizing Global Connections". It's a purely PostGIS-based solution using reprojection to create arcs. 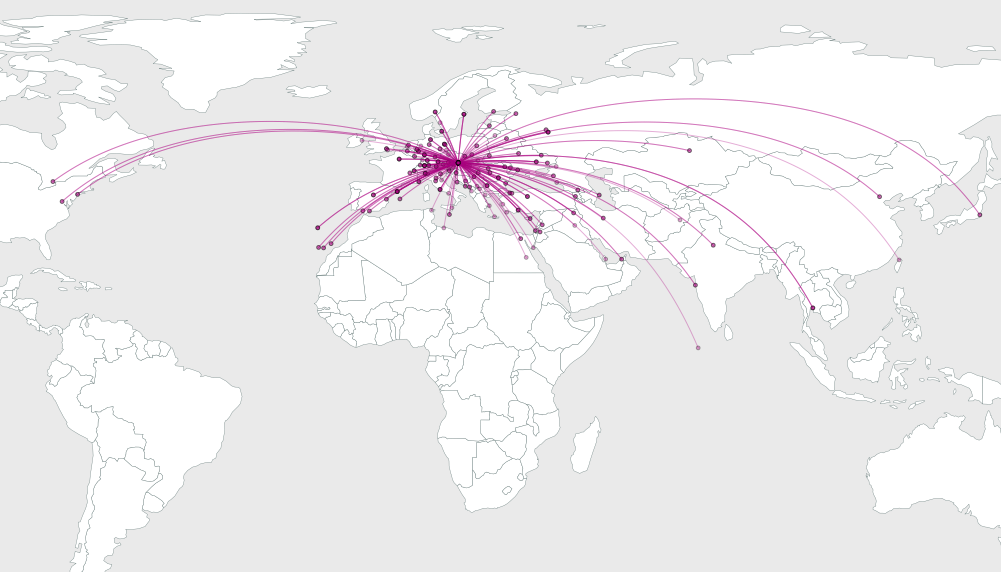 The problem is to figure out how much to bend the arcs to enhance their visual resolution.

Here's one solution (among the many possible). Let's consider all the arcs emanating from a common origin. The arcs get most crowded here. To separate them the best, let's arrange it so they spread out in equally-spaced angles. It's a problem if we draw straight line segments from the origin to the destinations, because there will typically be clusters of destinations in various directions. Let's use our freedom to bend the arcs in order to space the departing angles as evenly as possible.

For simplicity let's use circular arcs on the map. A natural measure of the "bend" in an arc from point y to point x is the difference between its bearing at y and the bearing directly from y to x. Such an arc is a sector of a circle on which y and x both lie; elementary geometry shows that the bending angle equals one-half the included angle in the arc.

As a preliminary step, assume the bearings (all between 0 and 360 degrees) are in ascending order: this requires us to compute the bearings and then sort them; both are straightforward tasks.

this is the bending to use.

It's a matter of elementary geometry to draw a circular arc from y to x that subtends an angle of 2 b_i, so I'll skip the details and go straight to an example. Here are illustrations of the solutions for 64, 16, and 4 random points placed within a rectangular map 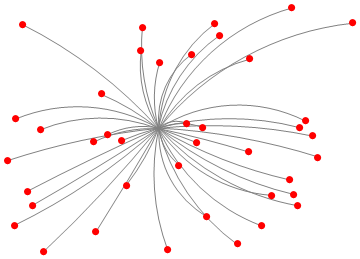 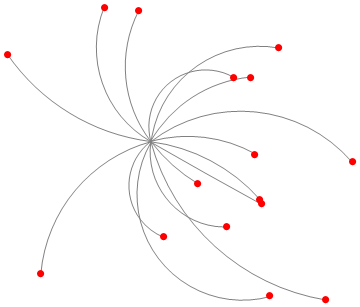 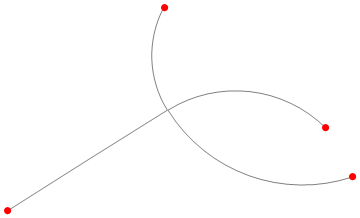 As you can see, the solutions seem to get nicer as the number of destination points increases. The solution for n = 4 shows clearly how the bearings are equally spaced, for in this case the spacing equals 360/4 = 90 degrees and obviously that spacing is exactly achieved.

This solution is not perfect: you can probably identify several arcs that could be manually tweaked to improve the graphic. But it won't do a terrible job and seems to be a really good start.

The algorithm also has the merit of being simple: the most complicated part consists of sorting the destinations according to their bearings.

I don't know PostGIS, but perhaps the code I used to draw the examples can serve as a guide for implementing this algorithm in PostGIS (or any other GIS).

Consider the following to be pseudocode (but Mathematica will execute it :-). (If this site supported TeX, as the math, stats, and TCS ones do, I could make this a lot more readable.) The notation includes:

The executable part of the code is mercifully short--less than 20 lines--because over half of it is either declarative overhead or comments.

z is a list of destinations and y is the origin.

Create a circular arc from point x to point y starting at angle \[Beta] relative to the x-->y bearing.

Compute the bearings from an origin to a list of points.

Compute the midrange of the residuals of a set of bearings.

You can visualize this by coping the query into the text box and pressing Map1 at http://www.postgisonline.org/map.php

I ended up trying this out to curve a set of "two point" linestrings using the ST_CurveToLine function as suggested by @Nicklas Avén.

I passed the following 3 coordinate sets to the ST_OffsetCurve function :

I used the ST_OffsetCurve function to calculate the offset - 1/10th of the length of the original line in my example.

Here is the SQL I used to generate the curved lines from the original straight lines :

I would think you'd just want to roll your own polyline with some vector math , http://en.wikipedia.org/wiki/B%C3%A9zier_curve, or if your gis has an ICurve interface.

Not the answer you're looking for? Browse other questions tagged postgis symbology visualisation transportation origin-destination or ask your own question.

11
Creating arcs between two points in ArcPy?
17
Mapping matrix of origins and destinations in QGIS?
12
Making Great Circle Arcs which look good on Web Mercator map?
13
How to create desire lines in QGIS?
10
Making radial flow map showing curved lines over short distances (20km) using ArcGIS for Desktop?
4
What is this PostGIS query doing to show great circle connections?
5
Lines as Great circles on a map
4
Draw two separate lines from A to B and B to A
3
Create links between points on CartoDB
4
How to offset/displace overlapping lines in a web map?
See more linked questions

5
PostGIS ST_Distance vs. pgRouting
4
Symbolizing Layers in PostGIS
5
PostGIS algorithm to unite points of two geometries that are within specified radius
2
ST_Intersects() in WHERE clause misses results
1
Drawing curved lines in CartoDB?
2
PostGIS - How do I create a line that directly connects two earth points without travelling over a geodesic?
1
Can I use a GeoServer or MapServer service to perform the necessary spatial queries?
4
Setting up service compatible with GeoPy?