How to intersect 2 polygon layers with a given tolerance for features in different layers only?

I can intersect 2 layers with polygons using ArcMap. However I can specify only overall tolerance no matter what layer a feature is in (even same layer). So I either end up with lots of slivers if I don't tolerate snapping, or I end up collapsing small features from the first layer that I'd want to keep.

I'm open to a solution using any tool be it ArcMap or some python library/script.

Here is the rough idea of what I want. 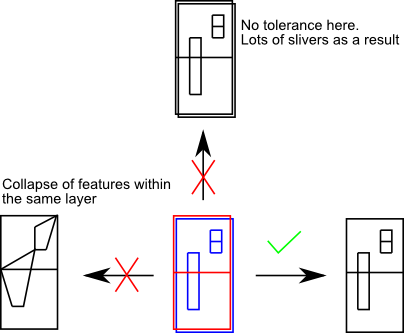 arcgis-desktop arcmap geoprocessing
Share
Improve this question
edited May 25 '15 at 4:28

First run Integrate on both layers with your desired cluster tolerance and ranks.

After this just run the union tool.

Not the answer you're looking for? Browse other questions tagged arcgis-desktop arcmap geoprocessing or ask your own question.

3
Copying Symbology between layers with different numbers of features
1
Making polygon boundaries of different feature classes coincident?
2
Dissolving Features from different Layers
4
Snap Input Rules
0
Match polylines up to polygon
1
Snapping feature classes together for one section of a polygon and not the whole feature where slivers are visible
0
Using Integrate tool to “snap” points