How to Create a Version 10 File Geodatabase from an XML from ArcGIS 9.2?

A client has given me an XML document for the schema of an ArcGIS 9.2 Geodatabase. The final goal will be to create a version 10 version of the geodatabase but the client doesn't have version 10 yet. I have been trying to create a new geodatabase using this XML file but am not having any luck.

So far, I have tried to create a new 9.2 Geodatabase using the Create File GDB Tool. Once I have created the version 9.2 geodatabase, I tried importing the XML file by right clicking on it in ArcCatalog. Every time I import it, I get the following error: 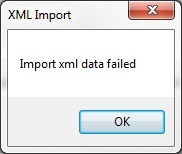 XML file is about 7MB.

I tried running the Import XML Workspace Document tool and it displays this error. Is the XML file corrupt? How could this have happened?

The client has sent me a different XML file (the first one was opened in notepad and she thinks she may have corrupted it). However, I'm getting a seperate error now. I'm getting the following:

I Googled the above error and it may have something to do with the fact that the client is using ArcFM.

In answer to the comments, I've opened the xml file in Internet Explorer and Notepad++ and it is definitely an XML Workspace file. It has over 100,000 lines so I wasn't keen to read it all, but wehre it says version it does say "sde.DEFAULT". I don't have SDE set up in my office, could that be the issue?

Should the client export the data first to a file geodatabase?

I spoke to the client about this who then passed it on to ESRI support. ESRI sent me a 10.1 geodatabase which I could open but there were some feature classes which were locked. I couldn't view the properties on them or the attribute tables. I sent it back to the client who passed it on the ESRI again. ESRI removed the ArcFM dependencies and sent me a version 10.1 Geodatabase.

Not the answer you're looking for? Browse other questions tagged esri-geodatabase error xml import file-geodatabase or ask your own question.

8
What are convenient uml tools to create geodatabase models?
3
Error importing XML workspace document to file geodatabase
3
ArcGIS XML Import Failed - how to find out why it failed?
0
csv data into an .xml Workspace Document to import into my geodatabase?
0
XML Schema into Pathfinder Office to create a Data Dictionary?
0
How to import data (with schema) from MSSQL to PostgreSQL?
1
Import XML workspace into enterprise geodatabase with different spatial reference system