Why does my 113th Congress Shapefile match up with the wrong districts across the country?

I downloaded a Shapefile from the Census on the 113th congress broken down by district nationally: http://www2.census.gov/geo/tiger/TIGERrd13_st/nation/tl_rd13_us_cd113.zip

Within the .dbf file, there were no good indicators of how the districts are normally laid out (Eg. PA-15); each state was assigned a number and then a congressional district, so I figured out what the state codes meant (based on other census shapefiles and how many districts were in each state and made a new column that I'm 99.9% sure is right based on the information given. The first four rows are what came with the shapefile and the last highlighted row is what I added:

And here's what it looks like when I run a query for the districts that I've defined as Pennsylvania:

Pretty sure that's not what Pennsylvania looks like! Can't figure it out -- because, again, I'm really sure that I defined each state's number as the proper actual state. Any ideas as to what might be wrong?

And sorry about all the links to pictures -- since this is my first post, I'm not allowed to post any images or more than two links yet.

Setting a filter "STATEFP"='42' on the original dataset gives a good picture: 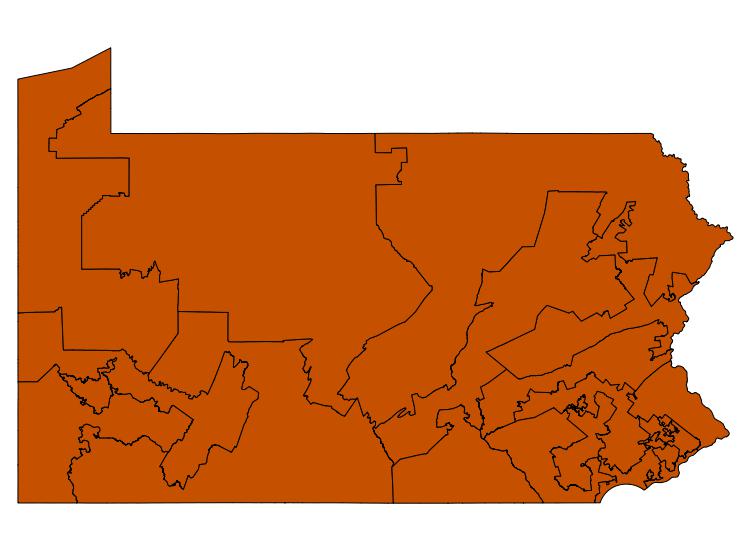 If you only want PA congressional districts:

It will be smaller, faster, and you will not need to filter, modify. The census data is available but sometimes difficult to understand,interpret the file names and fields. If you nose around a bit, you can find file name definitions and field name definitions.

2
Need to generate ids to connect points and polygons
2
Simple Spatial Join of Point Feature to Polygon Target Feature Not So Simple (Source Files Included)
2
Having trouble matching up U.S. Census shapefiles in QGIS
4
Finding combinations of polygons in PostGIS
0
What shapes are inside another shapefile
0
Using QGIS to sort datapoints into districts
3
QGIS: Feature passes ‘Check validity’ but ‘Fix geometries’ has an issue - where to start?