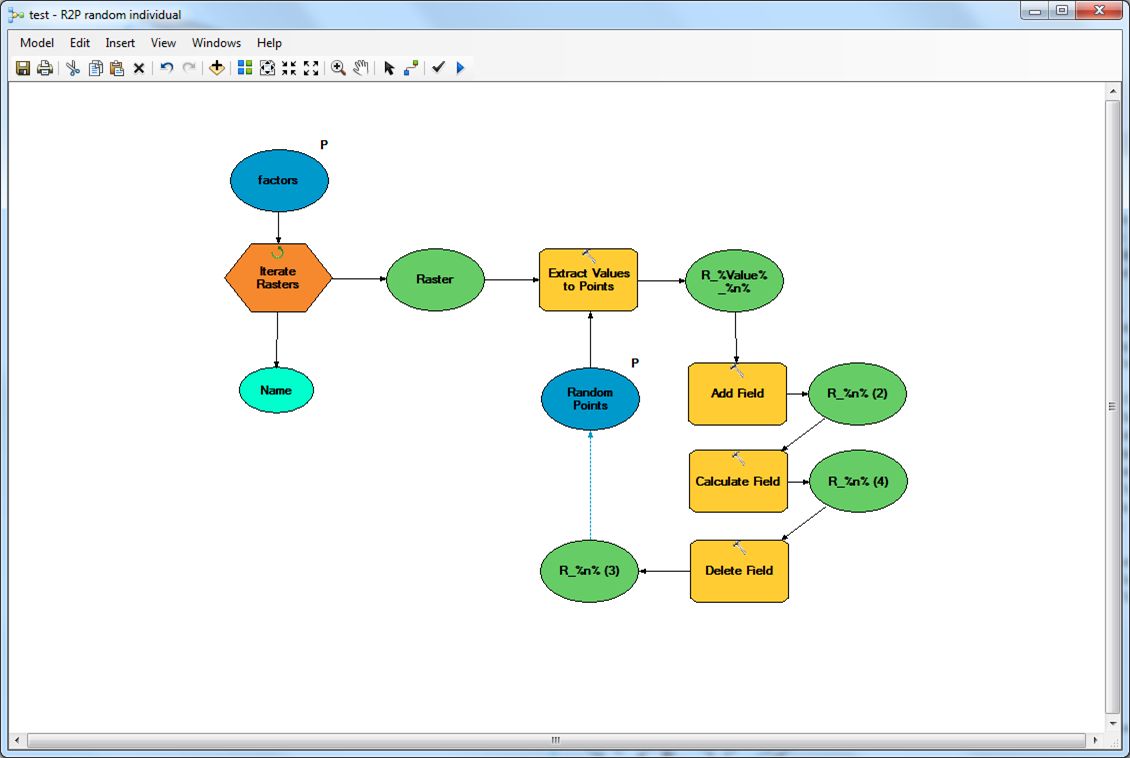 Hello! Hopefully a quick question. I have a simple model below that iterates through a folder full of rasters, taking each in turn to extract data values based on a single shapefile of Random point locations. The rest works over the points table to add a field named after the raster, calculates it from the RASTERVALU field, then deletes the RASTERVALU field. That file is fed back into the model as the next raster comes through to repeat the process. The end result is a series of shapefiles where the final one has as many fields as raster, named after the raster, and with its values.

Now I want to do this for many shapes/feature classes of random points. I have tried to use this is a nested iterator model with no luck. When nested, I can pass the name of each random point shp so that it does not over-write the previous run, but in that case the raster iterator only works for the first raster. I realize this might be asking a lot of the model builder, but maybe someone has a better idea fro nesting or a different logic approach. Thanks!

You may also consider adding a new identifier field to each points file and then merging to one file for input to the Extract Multi Values to Points tool - therefore no iteration needed. However, for huge numbers of points this merge may tie up your computer for a long time.

Not the answer you're looking for? Browse other questions tagged raster arcgis-10.1 modelbuilder or ask your own question.

6
If Then Else in ArcGIS model builder
1
Model Builder Error populating attributes with Calculate Field
4
Iterate through domain names and delete domains using ModelBuilder?
2
Table Select does not work in Model Builder, when using parameter in SQL
1
Iterate variables in Con statement in Raster Calculator- model builder
3
Get multiple values from summary tables in Model builder
3
Parent model that iterates over nested models that iterate over Buffer?