What multiplier would you use for calculating estimated population?

Given a number of address points in a given area, what multiplier would you use for calculating estimated population? I have seen 2.5 in a few places, but I was wondering what the generally accepted multiplier would be.

Usually, you can get "average household size" for an area (or at least comparable area) from statistics agencies. I'd suggest using that.

It really depends on which part of the world we are talking about.

http://factfinder.census.gov/servlet/SAFFFacts suggests a value of 2.59 for the U.S.

This would be an acceptable value if it's save to assume that most addresses are homes (and not offices, ...).

Even within the US there is substantial variation in the mean number of persons per household (and even more variation in persons per address). Data are readily available in most developed countries. 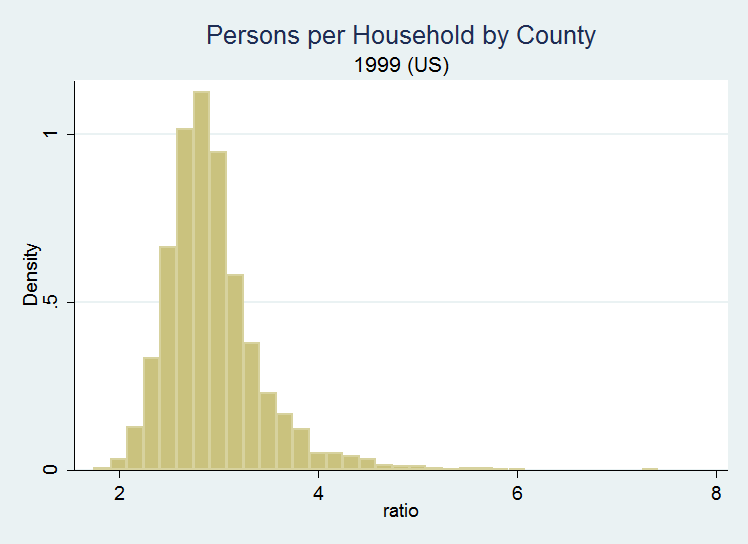 This histogram of 1999 data (as supplied by ESRI, using Census Bureau data) shows that the county average varies by more than a factor of 2. As you might expect, ratios are low in rural counties: of the seven values less than 2.0, five are in North Dakota. The high ratios are not necessarily from urban counties, though: those tend to come from just a few states in the south and west (GA, CO, TX, UT).

If you can tolerate estimates that might be off by a factor of 2 (or more) within county-wide areas, you could adopt a universal average somewhere near 3. With only a tiny bit of research, though, you can get data down to the block level (for free) and obtain much more accurate estimates. In the US these are published in tables P1 and P15 of the SF1 Census 2000 data.

Not the answer you're looking for? Browse other questions tagged analysis population demography or ask your own question.

7
How to redistribute population data using Python in ArcGIS?
1
estimated population around a point qgis
2
US Census Data - An orderly means of deducting the area-weighted population of segments of incorporated places from the population of counties?
1
Multiplying Raster Value with Pixel size using QGIS?
1
Visualisation of “dominant” point in each location
2
USA census historical demographic data