Total of attribute field of point layer per polygon layer

Each point obviously has differing entries under the fish_caught field.

What I want to get is the average fish caught per lake (polygon).

So I need to have a total number of fish caught, per individual polygon, and then I can divide that by the PNTCNT file I create using the Points in a Polygon tool.

Ideas? I am relatively new to QGIS.

If getting PostGIS set up right now is more than you want to get involved with, you can get by with probably much less effort in the program you have chosen.

You will want to assign to each of your points the name of the lake so you can sum the catch by the lake variable. This is what ArcGIS folks call a spatial join. In qgis parlance, you can do a couple of things: 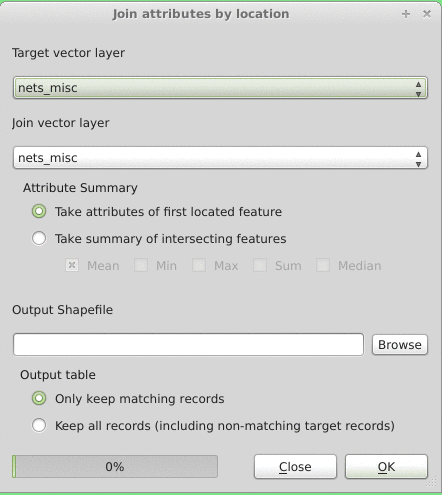 If you import your data into a PostGIS or Spatialite database, this is a pretty simple task for a spatial SQL query. It would be something like:

Not the answer you're looking for? Browse other questions tagged qgis attribute-table point-in-polygon or ask your own question.

2
Adding attribute data together within multiple polygons in QGIS?
1
Create statistics by features in QGIS
3
Total of several values in field for points within polygons
1
How to calculate average value within a polygon(in Qgis with Python)?

3
In ArcGIS how can I append the number of points that are located inside each individual block groups of the entire US?
4
Calculation of average point distances from one another within a polygon grid
2
Add buffer only on one specific side of polygons
4
How to interpolate a point vector layer inside a boundary (polygon layer) QGIS/GRASS/SAGA?
4
QGIS's "Points in Polygon" counts zero in every census tract
5
Determining which polygon(s) each point lies in using QGIS?
5
Single point into individual polygon
6
Adding attribute features from the intersection of a grid with a point shapefile?
2
QGIS Random Points in Polygon PRESERVING Attribute Table?