Are ellipsoids a mathematical necessity?

The literature usually just tells us that the Geoid is too complex to describe mathematically and that we therefore fit different Ellipsoids to approximate it.

Are these Ellipsoids mathematically necessary, or could we define projections from the Geoid model to plane coordinates too?

geodesy ellipsoid geoid
Share
Improve this question
edited May 7 '18 at 5:52

This summarizes my understanding of some of the basic ideas. Because it is hard to find all of them clearly described and summarized in one place, I could be wrong or misleading about some of them: comments and corrections are welcome.

"Geoids" are approximations to a surface of gravitational equipotential.

The geoid is a hypothetical Earth surface that represents the mean sea level in the absence of winds, currents, and most tides. The geoid is a useful reference surface. It defines the horizontal everywhere and gravity acts perpendicular to it. A carpenter’s level aligns itself along the geoid and a carpenter’s plumb bob points down the vertical or perpendicular to the geoid. Water will not flow in aqueducts if the pipes are perfectly aligned along the geoid. Surveyors use knowledge of the geoid and the horizontal when they lay out highways and boundaries. 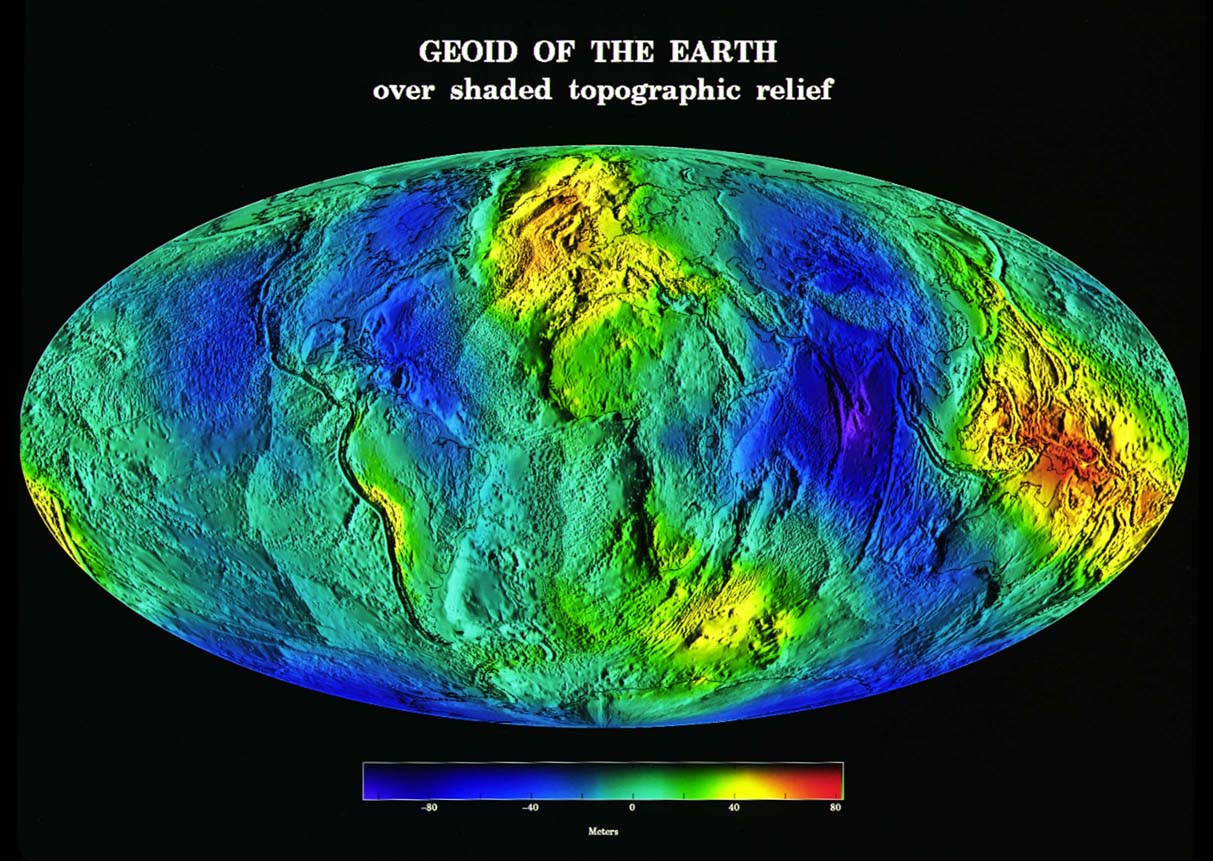 To get a sense of what is gained relative to a sphere or ellipsoid, note that

In return for squeezing out that last 0.5% of accuracy in describing how the geoid varies from the ellipsoid, you need hundreds to hundreds of thousands of parameters compared to two to describe an ellipsoid. Yes, it is mathematically possible to define a projection based on a geoid instead of an ellipsoid. [See "Coordinate charts" on pp 4-5 of this text, for instance. The modern mathematical definition of smooth curved surfaces, like a geoid, is based on a set of projections. The Implicit Function Theorem guarantees such projections exist for the geoid.] Computation would be, to say the least, inefficient (although it could be sped up by interpolation in precomputed tables). When necessary, the difference in vertical positioning can be computed after ellipsoid-based projection in terms of the geoid parameters or by interpolating in a precomputed grid of geoid values.

A serious potential problem with basing map projections on a geoid as reference surface is that the geoid is constantly changing worldwide. It will change with changes in sea level, for instance.

Because nowadays much geopositioning is done in geocentric coordinates, rather than by means of gravitational-based triangulating devices (such as levels), use of a geoid is practically irrelevant: an ellipsoid--however well it might or not be related to gravity, sea level, or the actual shape of the earth--serves as a reasonably stable reference surface relative to which everything else can be located and mapped. The geoid is then described relative to this reference. Its description is used in mapping primarily to permit GPS satellites to improve their positioning accuracy.

I am not a Geodesy expert, but far as I understand it, the geoid, is the shape that the surface of the oceans would take under the influence of gravity alone. It is the surface at which the intensity of gravity is the same.

The Problem isn't that it is difficult to describe mathematically, but it might be impossible to predict correctly and accurately.

For example near a Mountain Range, such as the Himalayas or the Andes, it changes drastically, due to the large mass contained in the mountain ranges. It even changes seasonally due to the amount of water in a reservoir behind a Dam (in the regions near the dam)

The Ellipsoid on the other hand is a regular surface, which can be used as a smooth approximation of the ideal earth's surface.

Yes, you must use an ellipsoid (or other mathematical surfaces).

the reason is that the Geoid is a Physical surface (defined as the equipotential surface of gravity strength field). Simple meaning - it has no mathematical formula (another simple meaning - it is a surface at the height of the mean sea level that if you put a drop of water on it it wont move).

the Geoid can not be mathematically created or utilized in calculations because its shape depends on the irregular distribution of the mass inside the Earth (reference).

When measuring with Dumpy level/ theodolite/ total station you measure with reference to the geoid - because you balance the device relative to the Gravitational field.

When measuring with a gps, you measure with reference to the ellipsoid (as defined in WGS84 Datum)

Not the answer you're looking for? Browse other questions tagged geodesy ellipsoid geoid or ask your own question.

64
How accurate is approximating the Earth as a sphere?
13
Meaning of “Elevation above surface of ellipsoid”?
6
Why aren't 3D Globes used as the basis of GIS systems?
6
Find gravity normal by ECEF or GPS coordinate of point

6
Accuracy of planimetric geometry vs. ellipsoidal model
3
For a non-geocentric ellipsoid, how does the Lat/Long/Ell Ht & semi-major axis & flattening implicitly define the centre of the ellipsoid?
2
Learning classical geography - recommended literature etc
3
Why not measure elevation from the center of the earth?
3
New coordinate system?
3
Is there a method to tell which hemisphere a point belongs to, in WGS84 geoid, where the equator is an arbitrary ellipsis?
1
Do different ellipsoids have different location of centre?
0
Bessel ellipsoid definition for LV95 (EPSG:2056)