I am trying to implement 3D barriers from a feature class into a network using a model, but I can't seem to get the resulting barrier to appear on the proper three dimensional plane. The feature class that the barrier is generated from a 3D feature, and displays properly in ArcScene. Yet when I run my model, the barrier that appears in the route layer doesn't retain the 3D information. I need to have the 3D information, as I don't want to apply the barrier to all features just to the features on that specific plane.

I have the barriers set up via a second "Add Location" tool, as a polygon barrier after the Add Location tool that generates the stops. Is there something that I need to set in the tool itself to retain the Z information from the feature class? I do not have "Use Network Location Fields instead of Geometry" selected.

Below a picture of the problem. The green is the feature class, red is the barrier that is created after running the model.

I should also add that I do not need the barrier to be extruded, or represent a three dimensional box or object, just that it needs to have the correct elevation.

I am using ArcGIS 10.1, with the Network Analyst extension, model creating the 3D routes via Model Builder. 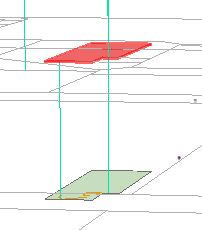 It turns out that barriers do not retain 3D information when processed, and the barrier will apply to all features regardless of z value. Read this thread to gain more information: http://forums.arcgis.com/threads/80757-3D-Barriers

Not the answer you're looking for? Browse other questions tagged arcgis-10.1 routing 3d network-analyst or ask your own question.