I have limited GIS experience with projections and I have some questions about trying to accurately display point data from two different sources in ArcGIS 10.1 in order to do a proximity analysis.

The second data set contains addresses that must be geocoded. I used the 10.0 US Streets Geocode Service (ArcGIS Online) from the Geocoding toolbar to create a point layer based on this second dataset.

Everything appears to line up perfectly well, but since the goal is an accurate proximity analysis, I hoped to confirm that the distances among points seemed plausible before doing more work.

I have tried different approaches for projections, ranging from assuming the geocoded points were WGS84 and then projecting as NAD83 to trying to re-project both of the layers to a Projected Coordinate System such as a relevant State Plane NAD83 system. Again, the points look fine and the "Source" coordinate system information matches across both layers and the data frame. The problem is that, no matter what I do, the distance tool is giving me what seem to be extremely low distance values compared to an online tool that measures linear distance between points. For example, the online tool reports a linear distance of 6,214 feet between 2 reference points, while different projection approaches with ArcGIS are giving me distances of 4,418.753176 feet and 4,384.41136 feet between the same 2 reference points.

Here are my questions:

1) Does the 10.0 US Streets Geocode Service automatically display points with WGS84? If so, is the correct strategy to then define the Geographic Coordinate System for the points layer as WGS84 and, after that, use the Projections and Transformations->Feature->Project tool to display in NAD83?

2) Is it a mistake to think of a website that uses Google Maps to calculate linear distance between points as some sort of verification? Are the reported distances on the website also flawed due to the "Web Mercator" projection used for Google Maps? If it is a mistake, can anyone suggest a better resource? Does an 'authoritative' resource even exist?

Any feedback or advice would be greatly appreciated. Apologies if I'm incorrectly using some of the terminology or missing something very basic. Thank you!

Specifically regarding projections: All projections end up "warping" space in some way, and using different datums will also change "where" things are. (I'll note that when you're geocoding a table of addresses, the "Advanced Geometry Options" let you choose what spatial reference you want.) 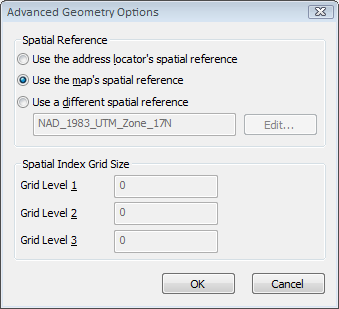 However, I think that a larger source of error might be the geocoding itself. For example, I used the ArcMap geocoding toolbar on my home address. In a simple basemap with Web Mercator projection, the house "point" is about 150 feet from where it should be. If I have a layer in the appropriate UTM zone instead, it's about 250 feet off. And that's not even getting into the question of whether I am measuring from my driveway or front door (another 25 feet of error), a problem which becomes larger with bigger buildings/facilities. I also see that about three houses in my neighborhood are all geocoding to approximately the same point (and I'm pretty sure they're not all supposed to be in my back yard).

Not the answer you're looking for? Browse other questions tagged coordinate-system arcgis-10.1 point distance geocoding or ask your own question.