Differences between DEM, DSM and DTM?

I am listing some of the acronyms used in our work and had to stop to think about whether to list these together or separately:

In some circles they seem synonymous, in others they seem to have distinct meanings.

Is there an agreed-upon definition for each that enables them to be distinguished?

In my experience, DEM is most of the time used as a generic term for DSMs and DTMs. I think this image on Wikipedia depicts the differences between DSMs and DTMs well: 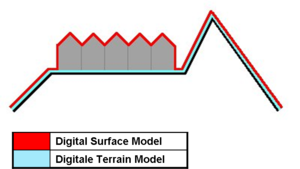 DEM is a subset of DTM and the most fundamental component of DTM.

In practice, these terms (DTM, DEM, DHM, and DTEM) are often assumed to be synonymous and indeed this is often the case. But sometimes they actually refer to different products. That is, there may be slight differences between these terms. Li (1990) has made a comparative analysis of these differences as follows:

Digital elevation models (DEM) are a superset of both digital terrain models (DTM) and digital surface models (DSM). Remote sensing generally captures the surface height, so the top of the tree canopy or buildings is returned, not the bare ground elevation. If this data is corrected to remove elements which extrude above the terrain height, you're left with a DTM.

In general, most people use DEM interchangeably with the other two terms, but it can matter: I once built a hydrology model using SRTM data in South America in very flat arid terrain, but because of the canopy height along the river itself, the true river location became the highest point on the terrain, causing a ruckus.

The Wikipedia article on digital terrain models also includes some useful background and examples you may find helpful.

In my experience, a more complete answer to this question lies in defining the difference between a DEM, DTM and a DSM. A DTM is NOT a generic name covering both DEMs and DSMs. So...

A DEM is a 'bare earth' elevation model, unmodified from its original data source (such as lidar, ifsar, or an autocorrelated photogrammetric surface) which is supposedly free of vegetation, buildings, and other 'non ground' objects.

A DSM is an elevation model that includes the tops of buildings, trees, powerlines, and any other objects. Commonly this is seen as a canopy model and only 'sees' ground where there is nothing else overtop of it.

A DTM is effectively a DEM that has been augmented by elements such as breaklines and observations other than the original data to correct for artifacts produced by using only the original data. This is often done by using photogrammetrically derived linework introduced into a DEM surface. An example is hydro-flattening commonly seen in elevation models done to FEMA specifications

Incidentally, a DEM is far cheaper to produce an a DTM.

It is not uncommon to find in the LiDAR/forestry literature the acronyms DTM and DEM being used as synonyms.

However, according to Behrendt (2012; paragraph 6 on page 15), there is a difference between them:

DSM as a raster. This represents the first echo the laser received for each laser pulse sent out, and represents the tops of buildings, trees, and other objects, or the ground, if unobstructed.

And to complete, a CHM (Canopy Height Model) or nDSM (normalized Digital Surface Model) is the DEM subtracted from the DSM, i.e., CHM = DSM - DEM.

digital surface model (dsm) – a first-reflective-surface model that contains elevations of natural terrain features in addition to vegetation and cultural features such as buildings and roads.

digital terrain model (dtm) – a bare-earth model that contains elevations of natural terrain features such as barren ridge tops and river valleys. Elevations of vegetation and cultural features, such as buildings and roads, are digitally removed.

As other have said, a DSM represents the Earth's surface in addition to objects (e.g., buildings, bridges) on the surface.

DEM and DTM are often used synonymously, but in my opinion, DEM is more accurate. How do you define and/or quantify "terrain"?

According to Merriam-Webster, terrain is:

Now ask yourself, what do the values of a DEM/DTM correspond to? The elevation above mean sea level.

Not the answer you're looking for? Browse other questions tagged terminology dem or ask your own question.

5
Creating DSM and DTM from a LAS using a freeware solution
5
How to obtain a DTM/DEM from DSM
2
Viewshed Analysis - use DSM or DTM?
3
Merging DEM and DSM into single raster
2
Convert DSM to DTM and nDSM