Problem: After following the documents, both JAI and JAI ImageIO are not show as true in "server state" panel (Has Geoserver not found them?).

I did the same steps like in Tomcat, but I'm a total noob with Jboss. I think that JBoss does not search in CLASSPATH for JAI extension, and it need to include JAI like a JBoss "module", but I couldnot find any information about that.

UPDATE: I have included the jar files, from the JAI installation file, in the WAR file, inside the path "/WEB-INF/lib", and now shown this in the panel: 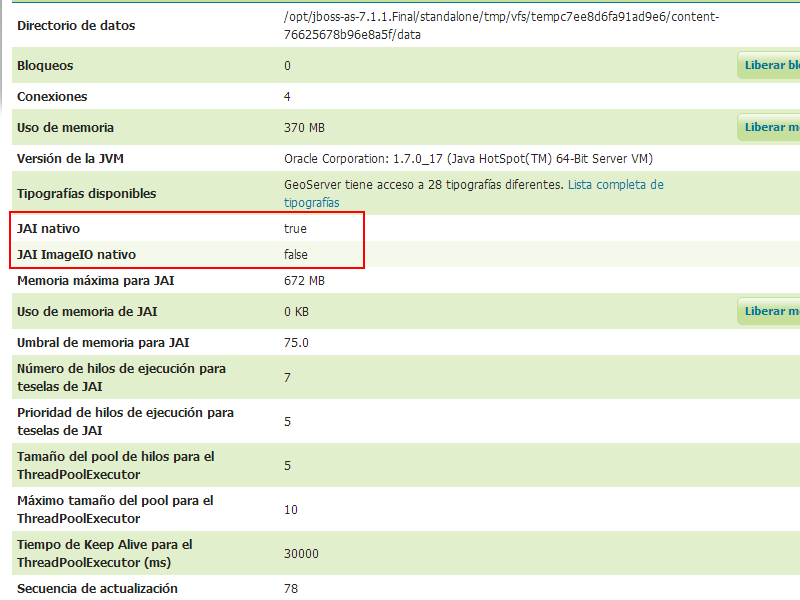 UPDATE 2: I put the .so (from JAI packages) in "/usr/lib", no luck. My co-worker is compiling Geoserver, in Eclipse, to see if we see happening in Jboss while loading the JAI. We hope to find a solution (I will share it here).

UPDATE 3: It's a problem in Jboss configuration. We will write down the solution as soon as possible.

I have the same problem, I have tried importing the geoserver code as an eclipse project and then deploying it to a JBoss instance and in that case JAI libraries are loaded without any problem. That is because eclipse launch their own paths to load that libraries, so if you want JBoss to be capable of loading these libraries you have to:

I guess it will work somehow by installing JAI and JAI ImageIO as jboss modules but I didn't managed it. The solution I've found is to install the native libraries into the java home that is used by JBoss and then add the following lines to $JBOSS_HOME/modules/sun/jdk/main/module.xml

Not the answer you're looking for? Browse other questions tagged geoserver jboss jai or ask your own question.

3
How to install GeoServer on Ubuntu 11.10 64 bit?
1
Deploying Geoserver 2.5 using JBoss 7.1.1
2
GeoServer 2.9.0 fails on MacOS with "Could not initialize class javax.media.jai.JAI"
0
Problems with installing the GeoServer Metadata extension
1
GeoServer 2.17.1 WAR running on Tomcat 9 not finding GEOSERVER_DATA_DIR context param
1
How can I install Native JAI on GeoServer 2.20.x. & GeoServer 2.19.x