How to implement a “Snap to Road”-functionality? [duplicate]

I am having a problem with a little application I'm trying to develop. What I do is take a phone with me and drive around the city on a bike.

I collect all the Latitude/Longitude-pairs and at home I plot them on a map.

What I get, however, is zig-zag lines, because the GPS location is not perfectly accurate. Here's an example plot: 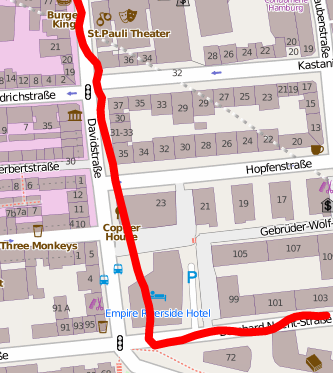 Obviously I was driving in a more or less straight line and not through the hotel. ;)

This is perhaps basic for GIS-experts, but here's my question: How do I get better results, with the red line (and thus the recorded points) being on the roads?

These are the things I've considered:

I think it should be possible to get data on roads for a given location. (OSM?) Then perhaps the nearest road and the nearest point on that road from the current position could be calculated and the position could be adjusted to be ON the road. Sort of like the "snapping to grid" function of graphical interfaces.

If this is the right approach, what are some pointers for software and methods I can use?

I assume I will have to deal with the following problems:

Looking at car navigation software it seems that this problem has long been solved. Are there any implementations that can be re-used, preferably of course for the iOS?

I have implemented a simple map matching algorithm:

Here is the actual result for the example plot above: 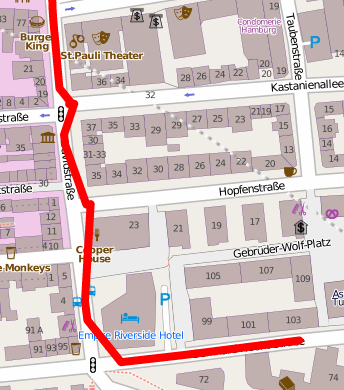 I think the next step is to calculate multiple points in step 4 and use each of them in a probability / plausibility step 4a, where each one is checked for things like wether the bike really took a turn onto another street.

It's not real-time so it should be possible to take the future into account (e.g. to look at the next measurement that followed, or the next few.), and to calculate a probability score for each candidate point.

Anyway, just wanted to post a quick update. Perhaps this will help someone.

Browse other questions tagged maps snapping or ask your own question.

3
ERROR 000800 when trying to snap points layer to line or buffer layer?
1
Using Snap tool with iterator in ModelBuilder?
14
How to snap a road network to a hexagonal grid in QGIS?
0
Sticking GPS waypoints to closest road?
1
Snap points to end points of line within 50cm radius in MapInfo Pro
5
Snap existing line vertexes to nearest line in MapInfo
4
Snap lines based on hierarchy
2
Drag points on lines with snapping in QGIS 2.18