We are migrating parcel editing environments from AutoCAD to ArcGIS and I'm having trouble creating curves within a Parcel Fabric that are not tangent to lines. For example, what would be some methods for creating the curve (a=9.618, r=190.000) for this image. 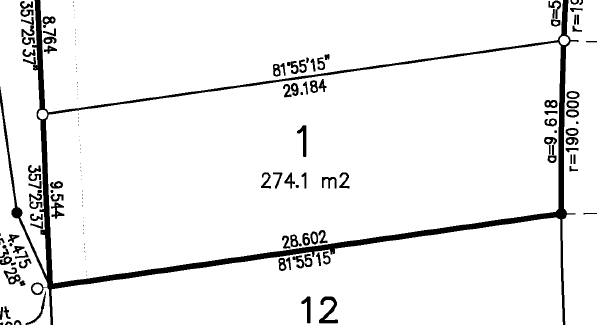 I have yet to find good documentation for performing this task. Anyone know of good sources?

The problem in your example is that you actually have insufficient information given to construct the curve, at least which is shown in the image. You need at least three values to construct a curve - two to define and one for direction - and you only have two. There are a couple of possible solutions.

The first, in this specific example, would be to start at one corner that is an end of the curve and enter your calls around to the other. Then just snap to your first corner to close with a straight segment. This will automatically generate the chord bearing of your curve, which is a key piece of information you are missing. You can then go into the Lines tab of the Parcel Details, delete the distance, enter in the information you are given - radius and arc - in the appropriate fields, and it will alter that segment to a curve.

Note that the attributes available for entry in the Lines tab depend on the settings for the current Plan that the parcel is being created under. If you don't see attribute headings for the information you have, you'll need to click Parcel Editor drop-down, choose Plan Directory, create (will prompt) or alter (right-click) a plan, and change the Properties > Record Format to a format that matches what you have. For example: radius and chord, radius and arc, or radius and central angle.

Also note that this solution would not work in a case where your boundary traverse includes more than one curve, as it relies on you already knowing where the two endpoints are. It also can technically alter your accuracy and misclosure information, since the bearing you get is assumed based on following a traverse to establish endpoints and may differ from what it has or should really have been recorded as.

One tool that can help in such a case is the Curve Calculator on the COGO toolbar. It allows you to input minimal information about a curve and will calculate everything else from that, which may give you sufficient missing information to plot the curve. However it can't give you the chord bearing, which is the usually critical and missing piece of information.

The solution methods are really going to depend on what information you have and what you're missing for the curve and what surrounding calls can be constructed from a common point. The surveys and legals I typically deal with usually include radius, arc length, delta or central angle, chord distance, and chord bearing. Sometimes they are listed in tables and not directly on the graphic plat, and sometimes only three of them are listed in the text legal. In your example above I suspect there may be a key piece of information not visible in the image extent posted.

Another method would be to use construction lines, assuming you have information locating the center point of the curve or points of tangency.

A couple of help files you might find relevant as far as constructing curves and shorthand for entering information (such as negative numbers mean left, positive are right curves) or overriding the current plan record format for an odd measure are:

Not the answer you're looking for? Browse other questions tagged arcgis-10.1 editing parcel parcel-fabric metes-and-bounds or ask your own question.