How to find the maximum-area-rectangle inside a convex polygon?

In this post we are looking for algorithms / ideas on how to find the maximum-area-rectangle inside a convex polygon.

In the following figure, numbers are the areas of the fitted rectangles. As shown a desired rectangle can vary in each dimension and can be in any angle.

We don't have any clear idea how to deal with the problem mentioned as so we asked here. Nevertheless, we guess the maximum-area-rectangle may be one of those that has one edge aligned on (not necessarily the same length edge, of course) an edge of the polygon. 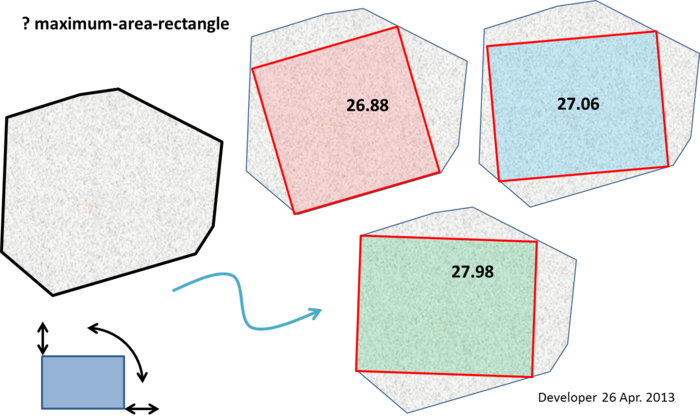 Some notes too big to put into a comment (though this doesn't suggest an obvious algorithm):

I proved it to myself in four steps:

Note #1: At least one vertex of the maximum area rectangle will always lie on the boundary of the polygon. This is pretty obvious, but a proof could go like this (by contradiction): Suppose you had a "maximal" rectangle with no vertex on the boundary of the polygon. That means there would be at least a little room around each of its vertices. So you could expand your rectangle a bit, contradicting its maximality.

Note #2: At least two vertices of the maximum area rectangle will always lie on the boundary of the polygon. A proof could go like this (again by contradiction): Suppose you had a "maximal" rectangle with only one vertex on the boundary (guaranteed by Note #1). Consider the two edges not adjacent to that vertex. Since their endpoints are NOT on the boundary, there's a little room around each. So either of those edges could be "extruded" a bit, expanding the polygon's area and contradicting its maximality.

Note #3: There are two diagonally opposite vertices of the maximum area rectangle that lie on the boundary of the polygon. (We know from Note #2 that there are at least two, but not necessarily that they're across from each other.) But again by contradiction, if the only two boundary vertices were adjacent, then the opposite edge (neither of whose vertices are on the boundary) could be extruded a little bit, increasing the area of the rectangle and contradicting its maximality.

Note #4: (EDITED) If the maximum area rectangle is not a square, then three of its vertices will lie on the boundary of the polygon.

To prove, suppose that's not the case, i.e. that the maximum area rectangle is not a square, but only two of its vertices are on the boundary of the polygon. I'll show how to construct a bigger rectangle, contradicting the maximality.

Call the vertices of the rectangle A, B, C, and D. Without loss of generality, assume that B and D are the two that are on the polygon boundary. Since A and C are on the interior of the polygon, there's some wiggle room around them (represented with circles around A and C in the picture below). Now draw a circle around the rectangle, and slide points A and C a little bit around the circle by the same amount (to make A' and C', pictured below) so that the new rectangle A'BC'D is more square than the original rectangle. This process creates a new rectangle that is also within the original polygon and has a larger area. This is a contradiction, so the proof is done. 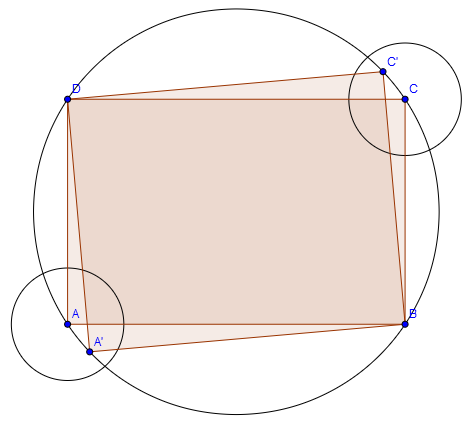 To believe that proof, you have to convince yourself that the area of a rectangle inscribed in a circle increases as it becomes "more square" (i.e. the difference between the edge lengths gets smaller). You also need the polygon to be convex so that the new lines are all within it. And there are probably other little details getting swept under the rug, but I'm fairly sure they all work out.

I have done a very quick and hideous sketch about your green note in the question. I couldn't post it as comment so I had to write an answer, even if it isn't one.
I believe that in the image below we have a maximum area rectangle (not perfect, it's just a sketch made on Paint to give an idea), and I don't think you can find a bigger one which would have a common side with the borders of the black plygon...
However I can be wrong, in that case you have all my apologies. 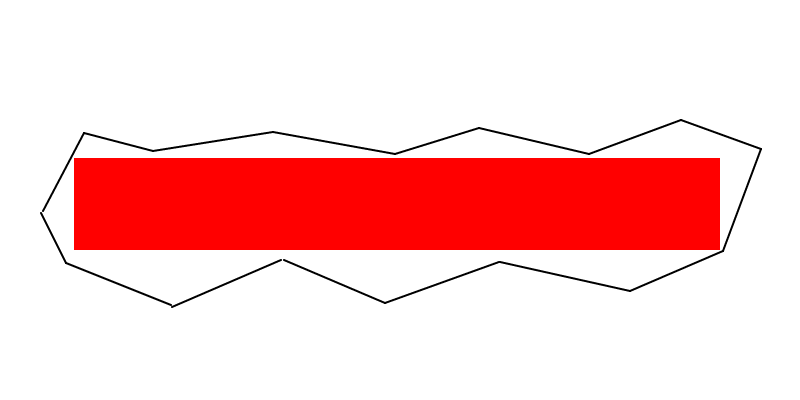 Most other algorithms find the maximum area rectilinear rectangle inscribed in a convex polygon, and have a complexity of O(log n). I don't think your guess that the max area polygon is aligned with one of the sides is correct, because all you would need to do is rotate the polygon n times, resulting in a complexity of O(n log n), and in my brief research I couldn't find anything saying it was that easy.

However, the paper Largest Inscribed Rectangles in Convex Polygons by Knauer, et. al., describes an approximation algorithm that will get you close to the right answer.

As best as I understand the algorithm, it builds on top of one of the known axis-aligned max area polygons, and then randomly samples points inside the polyon space, generates multiple axis from those random samples, iterates over those axis and applies the axis-aligned algorithm to each one, and then returns the biggest rectangle in that set.

Maybe have a look at this largest interior rectancle implementation. It uses the algorithm described in this paper. An example Image is

Not the answer you're looking for? Browse other questions tagged polygon geometry algorithm or ask your own question.

91
Finding minimum-area-rectangle for given points?

7
How to find the smallest-area ellipse circumscribing a convex polygon?
43
Finding center of geometry of object?
91
Finding minimum-area-rectangle for given points?
23
Space filling between random 2D lines
4
Calculate polygon area inside extent
9
inner convex-hulls in a set of 2D points
1
What algorithm allows me to calculate the set of all points inside a polygon?
2
Selecting polygons which contain majority of area from intersected layer by polygons using QGIS?