Here's in interesting challenge: I need to embed a table in a map layout so that the records in the table are sorted according to their geographic position on the ground. For example, in a north-to-top map, the northern-most feature (points in this case) should be first record, and the southern-most the last.

The map composition is in ArcGIS, but I'm willing to use gdal/ogr, qgis, etc. for the table sorting if need be.

To expand this question beyond my immediate use case and thereby make it more useful to the community, a robust solution would allow choosing other geographic sorts, such as west to east or inner to outer. 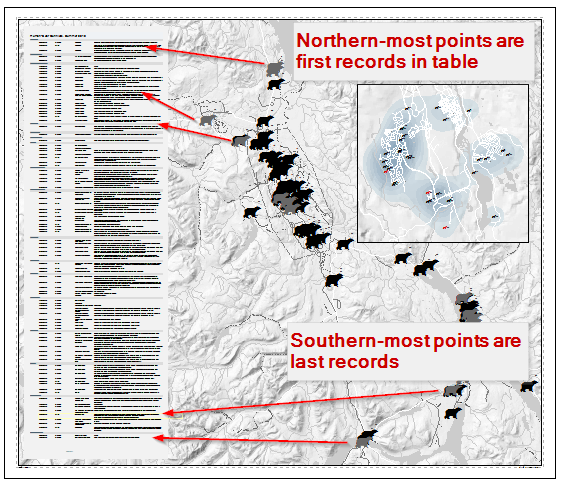 geoprocessing attribute-table sorting
Share
Improve this question
asked May 7 '13 at 17:56

To sort in the direction with a bearing of a degrees east of north, precompute the unit direction vector as (sin(a), cos(a)).

With a field calculation, obtain the (projected) [X] and [Y] coordinates of features (use their centroids or whatever for non-point features) if they aren't already available and compute a new field equal to the distance along the bearing, given by the dot product of the direction vector with the coordinates:

Sort the table on [z] in ascending order.

An "inner to outer" sort could mean many things, but one interpretation is that the sorting should be by distance relative to a central location. A similar solution applies, using the Pythagorean theorem to compute (squared) distance from a fixed point. (Applying the square root is unnecessary because it does not change the sort order.)

A more fanciful sort order is explained and illustrated at "One-dimensional map of the world."

To express whuber's answer in terms of tool use, here's a simple implementation of the North-South, East-West use case when using point data in Arcgis:

How to change the order of features in a shapefile? has solutions to do the table sorting part for both Arcgis and Qgis without need to export to an external program (though you still need to duplicate the table/feature class), and Sorting shapefile records on attribute to update new rank field using Python? has an arcpy method.

As commented by @klewis:

ArcGIS 10.0 and greater provides a Spatial Sort option in the Sort Tool

The Sort tool help, which needs an Advanced level license, describes its spatial_sort_method which:

Not the answer you're looking for? Browse other questions tagged geoprocessing attribute-table sorting or ask your own question.