Why do we use the terms “longitude” and “latitude” for a spherical body?

To specify a geographic coordinate we use the terms “longitude” and “latitude”. Far as I know, these terms derive from the Latin latitudo (= breadth) and longitudo (= length). In German we use the terms “Breite” (=english “breadth”) and “Länge“ (= english “length”).

The earth is a sphere. Why do we use “breadth” and “length” here? The earth has the same breadth and length in all directions. We may also use the terms “longitude” and “latitude” just the opposite.

In the fourteenth century, most known-world maps made in the Christian and Muslim West were T & O maps conventionally oriented to place Eden (believed to lie in the extreme East) at the top: 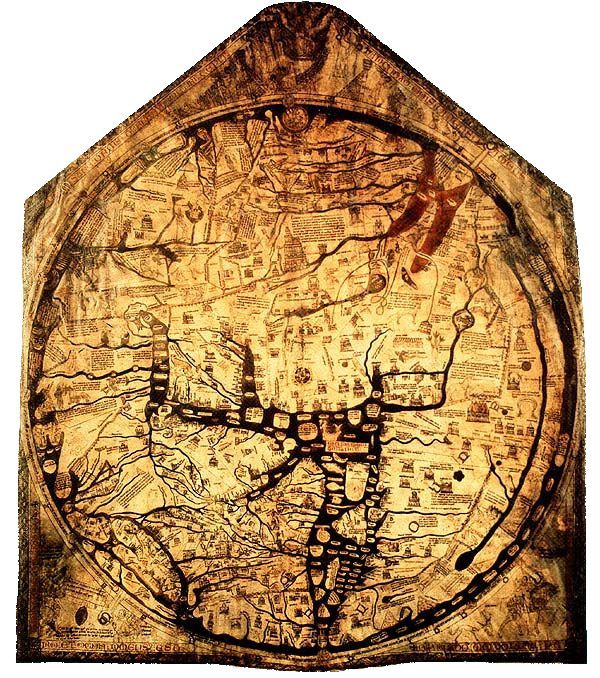 (From Wikimedia.) The black body in the lower middle represents the Mediterranean Sea, with Europe (North) to the left, Africa (South) to the right, and Asia (East) at the top. Breadth (latitude) on this map is north-south and length (longitude) is east-west.

For at least 2300 years it has been well known in the West that the Earth has a globular shape, so in the minds of medieval cartographers and their readers there would have been no confusion between the (flat) shape of the map and the actual shape of the Earth. We deduce these terms are derived from the cartographic point of view of a map reader rather than from descriptive geometry, even though today their definitions are geometric.

The Earth isn't a actually sphere; it does not have the same length and breadth in all directions. It is in fact fatter around the equator.

But never mind that, the planet isn't a logical sphere from the perspective of human exploration. Humans trot the globe mostly in the east-west dimension. Large areas around the north and sound poles are uninhabited and hostile to even temporary visitation.

Not the answer you're looking for? Browse other questions tagged cartography coordinates latitude-longitude terminology or ask your own question.