I am in the process of learning for doing WFST - OpenLayers in web. I followed this tutorial in the GisTutor.

But I am stuck with two problems:

I followed this GIS.SE question and I also do not configured the Proxypass as instructed here (also because I do not have Apache running the GeoServer).

In the latter part of the discussion between Janne Mattila with Iant, Iant suggests that:

and then Janne seems to be happy:

Nice and simple, that fixed it! I don't fully understand why it works like that, though. Can you explain what happens in OpenLayers when I access the page using file:// and when I use localhost:28080 instead? – Janne Mattila

I finally able to call my hHTML by localhost:8080/geoserver/www/rinotestpage.html in my browser, by putting my rinotestpage.html and the THEME folder (for bringing button PNG files to the app) into the C:\Program Files\GeoServer 2.3.2\data_dir\www. But my 2 problems in the above are persisting (WFS-T layer not appeared and feature created in client is not saved) 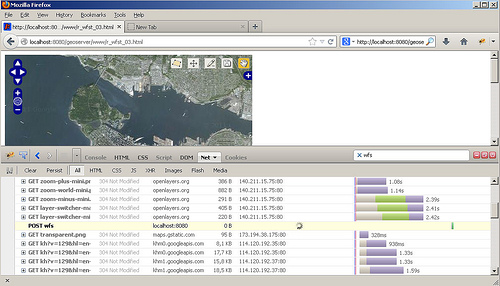 I am adding this as answer because OL proxyHost should solve your issue. I understood you didn't have apache. But openlayers uses a proxy.cgi and as mentioned in the Janne's link did you commented out the lines in proxy.cgi. you can search for proxy.cgi (don't know the exact location in geoserver distribution). But it happens to be in openlayers/examples/proxy.cgi. It will be better if you search for this file. An example of proxy.cgi is given here.

in the .cgi file

Not the answer you're looking for? Browse other questions tagged openlayers-2 geoserver wfs-t or ask your own question.