Printing MXD at A3 always prints at B5 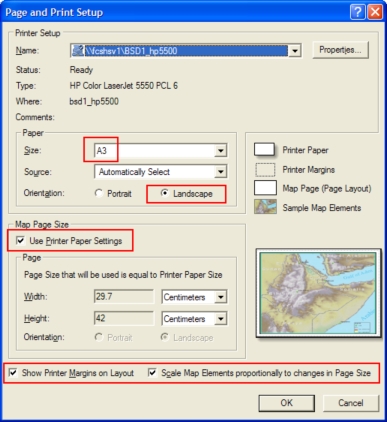 For some strange reason when my code prints out the map - it always prints to B5 which is obviously wrong as it should be A3. Printer complains that it doesn't have B5 - no map gets printed and misery ensues!
On further inspection of the code it seems that something strange is happening, the code below is a cut down version of the sample code just to show how you get the problem:

when the code sets the docPaper.FormID (it's defaulted to 1 which is esrPageFormLetter) and overwrites this value with the value in the mxd (IMapDocument) mapDocument.PageLayout.Page.FormID - in this case its 13 (esrPageFormSameAsPrinter), that makes sense as we saved the mxd to "Use Printer Paper Settings" (see image above).

The 13 value that is passed seems to cause some conflict in translation to the IPaper object - because it was passed 13 it thinks that is B5 and not to try and infer out the printer settings which should be A3.

Does anyone have a clue how to get round this problem?

I did eventually fix this by using a PrintLayout control - which although not elegant did seem to fix the printing problem. This fault has also been assigned a NIM code with ESRI (NIM065953) too. But I don't know whether they will actually fix it, I guess it's a low priority to them.

I fixed this problem by setting the dataframe extend to "FixedScale":

A few hours ago, I came in this page with the same problem about printer page.

And now, I guess I could summit a final answer.

As you might think about, you need to solve this problem with Windows paper size constants.

My solution is to create a function using "switch" to convert the property of esripageFormID into the proper papersize index found in the Microsoft link above.

And because of my printer driver, I can't make it print A0 size or Custom Size, so I just let it go, and noticing user that"You can't print this kind of paper correctly".

Not the answer you're looking for? Browse other questions tagged arcobjects printing mxd or ask your own question.

13
Scale in printed map (mxd) is different in code to manual printing
7
MapScale not being persisted properly in mxd when programmatically changed outside of ArcMap environment
6
Updating MXD file using ArcObjects?
5
Losing printer settings when saving copy of mxd from ArcPy?
4
In ArcObjects, how do I change the spatial reference of a Map (Data Frame) in an existing MXD?
11
Using Python to disable Scale map elements proportionally to changes in page size?
4
Avoiding arcpy.mapping.ExportToPDF locking mxd with data driven pages?