how to rename the band-names of a layer stack?

I created a layer stack of 20 images (all GTiff-files) using the gdal_merge tool in QGIS, available at:

The result is a GTiff layer stack of the 20 images, but the band names are band1, band2, band3...band20, looking at the properties.

Is there a way to rename the band-names, either afterwards, or during creation of the stack?

They are all from different sensors/dates and will be more meaningful to work with other names than band1,band2,band3.

I also needed to know how to rename bands in an open source environment so spent a whole day looking for answers.

There is no way to name bands in QGIS while merging.

But it can be done after the file is created, by editing their .aux.xml file. It works for both .tif and .img files, as far as I've researched.

In ArcMap, you will be able to see the new names in the Properties > Symbology window, when setting your colour composite, also in Table of Contents, under your image layer.

In QGIS, I suspect there is a bug, and this will not work. However, you can still label your bands in a more indirect way by also including after the element the subelement:

This will show up in the Properties > Metadata tab, for each individual band.

Example image attached, only first band was named for demonstration. Checked on ArcMap on Windows and QGIS in Ubuntu. 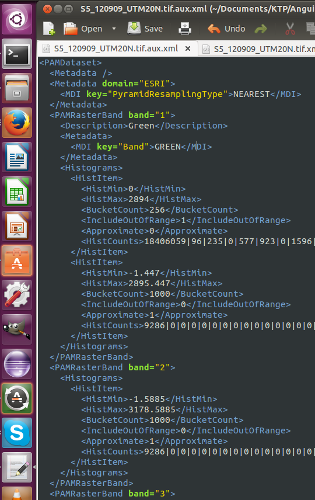 Not the answer you're looking for? Browse other questions tagged qgis raster gdal-merge stack or ask your own question.

6
Why do TIF loaded into PostGIS lose their colormap?
4
Where are the “band names” of an ENVI file once it is imported in R?
3
How to calculate minimum cell value for a multi band raster?
1
Efficiently changing field names added by Extract Multi Values to Points tool in ArcPy for large dataset?
4
How to create raster stack from names on R
1
QGIS does not recognise coordinates from geotagged images
3
How to control band order generation in GDAL Merge?
0
Batch changing of Raster Bands of Multiple Rasters in ArcGIS Desktop?