How can I use ArcGIS 10.1 to find a geodesic equidistant point defined by three points?

For example, I have coordinates for three base points on a coastline and I need to find the coordinates of the point off the coast which is equidistant from all three. It’s a simple exercise in geometry, but all the measurements must take geodesy into account.

If I was approaching this in a Euclidian manner, I could measure the geodesic paths connecting the base points, find the midpoints of the sides of the resulting triangle and create perpendicular orthodromes to each of those paths. The three loxodromes would presumably converge at the equidistant point. If this is the correct method, there’s got to be an easier way to do it in Arc. 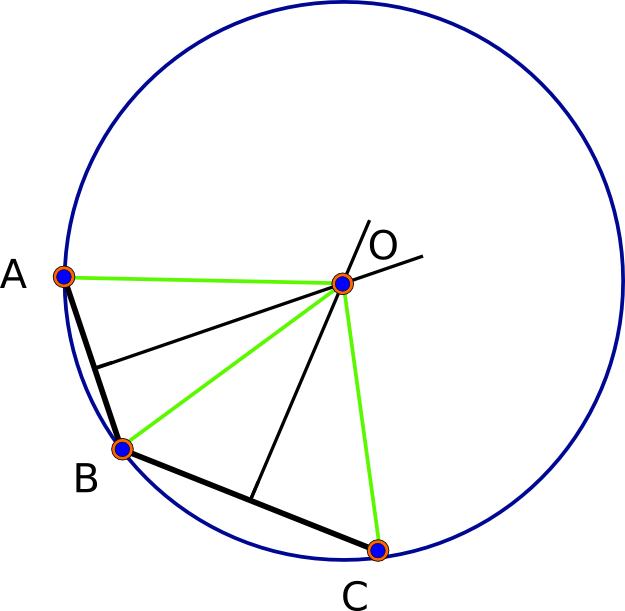 This answer is divided into multiple sections:

Analysis and Reduction of the Problem

Let's begin by observing that in the (perfectly round) spherical model there will always be a solution--in fact, exactly two solutions. Given base points A, B, and C, each pair determines its "perpendicular bisector," which is the set of points equidistant from the two given points. This bisector is a geodesic (great circle). Spherical geometry is elliptic: any two geodesics intersect (in two unique points). Thus, the intersection points of AB's bisector and BC's bisector are--by definition--equidistant from A, B, and C, thereby solving the problem. (See the first figure below.)

Things look more complicated on an ellipsoid, but because it is a small perturbation of the sphere, we can expect similar behavior. (The analysis of this would take us too far afield.) The complicated formulas used (internally within a GIS) to compute accurate distances on an ellipsoid are not a conceptual complication, though: the problem is basically the same. To see how simple the problem really is, let's state it somewhat abstractly. In this statement, "d(U,V)" refers to the true, fully accurate distance between points U and V.

These three distances all depend on the unknown X. Thus the differences in distances u(X) = d(X,A) - d(X,B) and v(X) = d(X,B) - d(X,C) are Real-valued functions of X. Again, somewhat abstractly, we may assemble these differences into an ordered pair. We will also use (lat, lon) as coordinates for X, allowing us to consider it as an ordered pair, too, say X = (phi, lambda). In this setup, the function

Here is where the abstraction pays off: plenty of great software exists to solve this (purely numerical multidimensional root-finding) problem. The way it works is that you write a routine to compute F, then you pass it along to the software along with any information about restrictions on its input (phi must lie between -90 and 90 degrees and lambda must lie between -180 and 180 degrees). It cranks away for a fraction of a second and returns (typically) just one value of (phi, lambda), if it can find one.

There are details to handle, because there's an art to this: there are various solution methods to choose from, depending on how F "behaves"; it helps to "steer" the software by giving it a reasonable starting point for its search (this is one way we can obtain the nearest solution, rather than any other one); and you usually need to specify how accurate you would like the solution to be (so it knows when to stop the search). (For more on what GIS analysts need to know about such details, which come up a lot in GIS problems, please visit Recommend topics to be included in a Computer Science for Geospatial Technologies course and look in the "Miscellany" section near the end.)

The analysis shows we need to program two things: a crude initial estimate of the solution and the calculation of F itself.

The initial estimate can be made by a "spherical average" of the three base points. This is obtained by representing them in geocentric Cartesian (x,y,z) coordinates, averaging those coordinates, and projecting that average back to the sphere and re-expressing it in latitude and longitude. The size of the sphere is immaterial and the calculations are thereby made straightforward: because this is just a starting point, we don't need ellipsoidal calculations.

For this working prototype I used Mathematica 8.

(The final If condition tests whether the average might fail clearly to indicate a longitude; if so, it falls back to a straight arithmetic mean of the latitudes and longitudes of its input--maybe not a great choice, but at least a valid one. For those using this code for implementation guidance, note that the arguments of Mathematica's ArcTan are reversed compared to most other implementations: its first argument is the x-coordinate, its second is the y-coordinate, and it returns the angle made by the vector (x,y).)

As far as the second part goes, because Mathematica--like ArcGIS and almost all other GISes--contains code to compute accurate distances on the ellipsoid, there's almost nothing to write. We just call the root-finding routine:

The most noteworthy aspect of this implementation is how it dodges the need to constrain the latitude (f) and longitude (q) by always computing them modulo 180 and 360 degrees, respectively. This avoids having to constrain the problem (which often creates complications). The control parameters MaxIterations etc. are tweaked to make this code provide the greatest possible accuracy it can.

To see it in action, let's apply it to the three base points given in a related question:

The computed distances between this solution and the three points are

(these are meters). They agree through the eleventh significant digit (which is too precise, actually, since distances are rarely accurate to better than a millimeter or so). Here's a picture of these three points (black), their three mutual bisectors, and the solution (red): 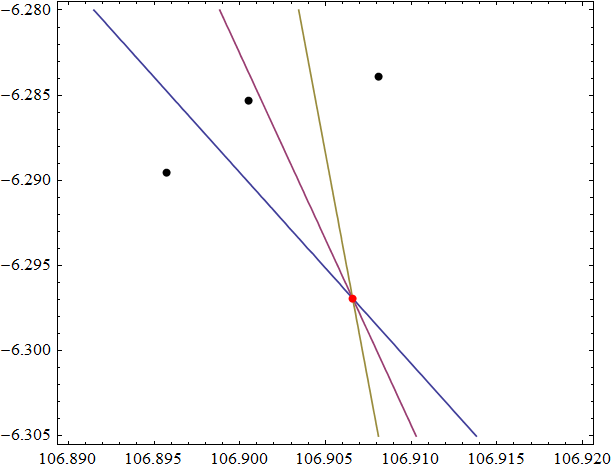 To test this implementation and get a better understanding of how the problem behaves, here is a contour plot of the root mean square discrepancy in distances for three widely spaced base points. (The RMS discrepancy is obtained by computing all three differences d(X,A)-d(X,B), d(X,B)-d(X,C), and d(X,C)-d(X,A), averaging their squares, and taking the square root. It equals zero when X solves the problem and otherwise increases as X moves away from a solution, and so measures how "close" we are to being a solution at any location.) 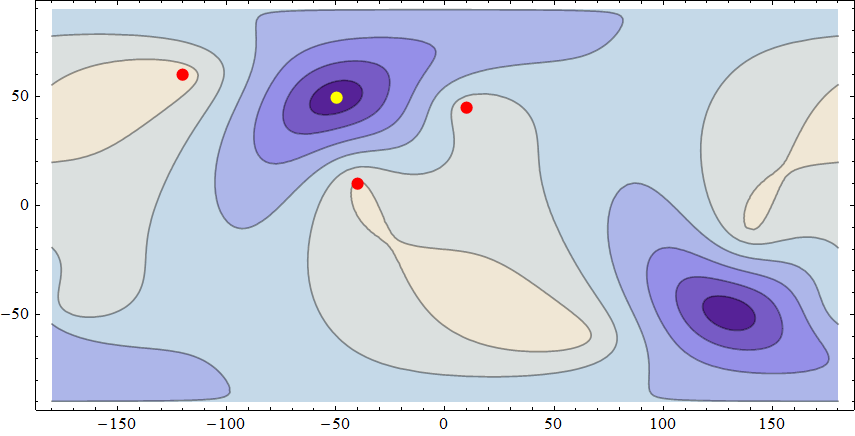 This map clearly shows another solution lies near (-49.2018206, 130.0297177) (computed to an RMS of two nanometers by setting the initial search value diametrically opposite the first solution.)

When the base points are nearly collinear and close together, all solutions will be nearly half a world away and extremely difficult to pin down accurately. The reason is that small changes in a location across the globe--moving it towards or away from the base points--will induce only incredibly tiny changes in the differences of distances. There's just not enough accuracy and precision built into the usual computation of geodetic distances to pin down the result.

These calculations, because they involve considerable searching using complicated distance computations, are not fast, usually requiring a noticeable fraction of a second. Real-time applications need to be aware of this.

Python is the preferred scripting environment for ArcGIS (beginning with version 9). The scipy.optimize package has a multivariate rootfinder root which should do what FindRoot does in the Mathematica code. Of course ArcGIS itself offers accurate ellipsoidal distance calculations. The rest, then, is all implementation details: decide how the base point coordinates will be obtained (from a layer? typed in by the user? from a text file? from the mouse?) and how the output will be presented (as coordinates displayed on screen? as a graphic point? as a new point object in a layer?), write that interface, port the Mathematica code shown here (straightforward), and you will be all set.

As you note, this problem arises in determining maritime boundaries; it's often referred to as the "tri-point" problem and you can Google this and find several papers addressing it. One of these papers is by me(!) and I offer an accurate and rapidly convergent solution. See Section 14 of http://arxiv.org/abs/1102.1215

The method consists of the following steps:

The necessary formula for the tri-point solution in the projection is given in the paper. As long as you're using an accurate azimuthal equidistant projection, the answer will be exact. Convergence is quadratic meaning that only a few iterations are needed. This will almost certainly outperform the general root-finding methods suggested by @whuber.

I can't directly help you with ArcGIS. You can grab my python package for doing geodesic calculations from https://pypi.python.org/pypi/geographiclib and coding up the projection based on this is simple.

Testing this out using Octave I get

as the tri point for New York, Tokyo, and Wellington.

For the example, this gives:

I was curious to see how quickly @cffk's approach converges on a solution, so I wrote a test using arcobjects, which produced this output. Distances are in meters:

Here is the source code. (Edit) Changed the FindCircleCenter to handle intersections (centerpoints) that fall off the edge of the azimuthal projection:

The previously posted code converged to the antipode in some cases. I've altered the code so that it produces this output for @cffk's test points.

Here's the output it now produces:

Here's the results I get with esriSRProjCS_WGS1984N_PoleAziEqui

Not the answer you're looking for? Browse other questions tagged geoprocessing arcgis-desktop geodesy trilateration or ask your own question.

24
Recommend topics to be included in a Computer Science for Geospatial Technologies course
2
How to perform trilateration using 3 lat/lon points without distances?

7
How to generate geodesic linestring from two points in C#
6
ArcGIS Desktop 10.1 SP1: how to install/use additional Python modules?
2
How to find the polyline's ID connecting two points in ArcGIS 10.1?
2
ArcGIS 10.1 Aggregate Points cannot create output
1
Find points within a radius in ArcGis 10.2
0
Is there a geoprocessing tool that I can use to find the closest road to a point on a map?
1
Can I use a ArcGIS 10.1 book for ArcGIS 10.3?
1
How to find cumulative length at points on a line?
1
Searching equidistant point from sets of points using ArcMap