I have a data set which contains global points. I would like to convert from long/lat to Albers equal area. However, the http://spatialreference.org proj4 world parameter values are actually for the USA.

Albers equal area might not be the best, both that is what I need to do.

To convert from long/lat to Albers equal area, from this Wikipedia article about the Albers projection: 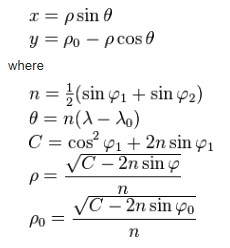 According to O.S. Adams's General Theory of Equivalent Projections (1945) (p.37, of the article not the PDF):

Besides the representation of the two hemispheres just described, it is sometimes desired to represent the whole world on one map. If it is desired to have an equal-area map of this kind, it would be necessary to use a conic projection with minimum deformations between the north pole and 50º south latitude. The deformation beyond the parallel of 50º south would not be troublesome as no land of importance lies beyond that point, since only a tip of South America extends further south. The north pole should be taken as the center and the separation should be made at 170º west longitude which passes through Bering Strait and does not meet any land area. This projection corresponds to m=0.432; it does not produce any deformation along the parallel of 18º25' south; at the north pole, a singular point of the projection, 2δ amounts to 118º26'. The greatest value of 2δ besides this point is 58º43'; of a², 1.710 and of a², 2.924.

My interpretation of that (someone please correct me if I'm wrong):

Not the answer you're looking for? Browse other questions tagged proj or ask your own question.

4
What is wrong with this Proj4 transformation?
2
Why is Spatialite delivering “Invalid SRID” error message
6
Having trouble finding out what coordinate system a map is using, and how to convert it
0
Drawing on jpg-map image with proj4 (perl)
3
What Proj.4 parameters have to be modified if the Y coordinates are shifted?
3
Converting GeoTIFF projection definition to proj4
4
What are correct options for converting from state plane nad83 zone NNNN to lat lon in proj4/cs2cs?