windows function with points in a mixed (multipoint/point) table

I have a table comprising multipoints (tracks) and points (stops between tracks). there can be several consecutive multipoints.
now, i want to merge any points lying very closely to each other (spatially and temporally) and delete all multipoints lying between them.
if there would be only one multpoint and one point in turn, i could delete the correct multipoints with comparing the respective lead point with the respective lag point (window function), but in case of group_id's 434 - 437 there are three multipoints in a row. so, how to compare the next point with the previous point in each case, even if there are more than one multipoint between those points? 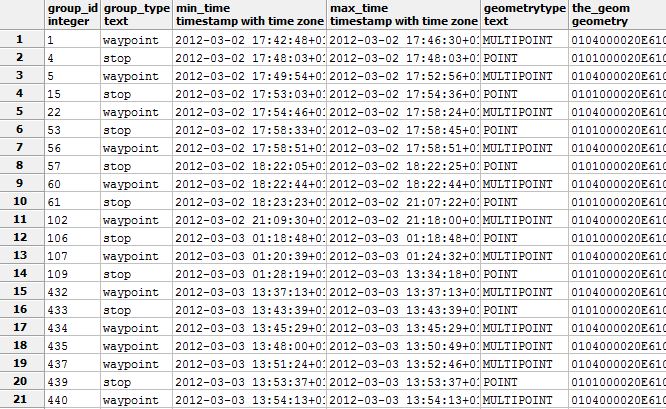 Browse other questions tagged postgis gps point distance or ask your own question.

6
How to draw a line between two places with via-points?
2
Delete duplicate spatial point/points in mssql from a perticular location
2
Linking up GPS points taken from rail network
5
Calculating “travelled distance” of a GPS track without including “stops”
5
How to calculate 'off track' error from GPS data?