I have two Geotiff files. with one side overlapping. Each Geotiff is surrounded by a black frame. 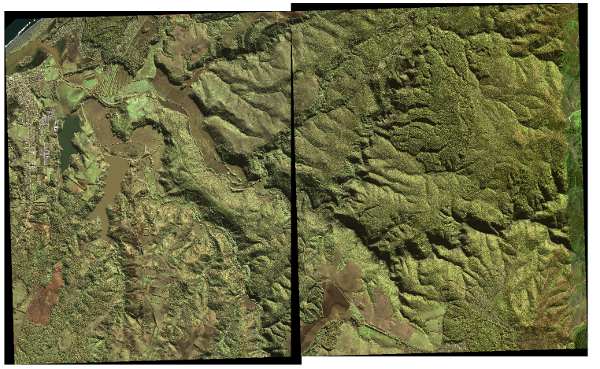 I have created an Image Pyramid with Geoserver 2.3.0 but when I try to see the layer on OpenLayers, the layer borders appear in black, so I can't see correctly the layer, because of thats black borders.It looks like tiles in the pyramid already has black zones inherited from the original tiffs.

First I have execute the next command on tiles to convert to Image Pyramid:

When I have executede this command, I executed the next one:

After that I try to make the Image Pyramid with Geoserver, but the result is the same that at first, I preview the layer on Openlayers and it appears with black borders.

I don't know what I must to do.

It looks like your original tiffs are reprojected. In their original projection, there are no black borders.

Best strategy is to take the tiffs in their original CRS, build a virtual index on both with gdalbuildvrt, then reproject the vrt to the desired CRS with gdalwarp and do the tiling or pyramiding on that with gdal_retile.py.

If you right click on the item in the layer panel tab and go to properties then transparency. Press the plus sign on the right hand side of the screen and then type "0" under the word from (first column in the header row).

After this you can right click > styles and copy style type and then paste to all other layers in the panel. This should remove the border.

Not the answer you're looking for? Browse other questions tagged geoserver raster gdal geotiff-tiff image-pyramids or ask your own question.