We need to find the distance of a series of point along a given polyline.

We have a polyline dataset repsenting rivers in a catchment, broken up into river reaches (FID 1 through 35 for example).

We also have a point dataset of abstraction licenses within this catchment, some of which are situated along rivers - we can tell from the attribute table which these are as they are defined as groundwater or surface water licenses.

The two are not related - i.e. one has not been derived from the other. Therefore not all the surface water licenses lie exactly over the river polylines, despite in 'reality' being on these rivers.

We need to be able to see which points are "upstream/downstream" of each other, and so wanted to have a list of which river reach the point is on, followed by the distance downstream from the start of this reach. We can then compare the downstream distances of two point to see which is upstream and which is downstream - the desired outcome!

To solve the problem of finding points on/very close to the rivers we were told to use a (small) buffer around each river reach and then to query the buffer to find the points within it.

This is fine but we are then left with an area (buffer), not a line, so we can't measure a distance along/within this.

Can we use a buffer as described to find out the points on/near the river reach in question and then, somehow (?!) query these points for distance along the river reach (polyline segment)?

This is a perfect task for the linear referencing capabilities in ArcGIS. See the help for Locating Features Along Routes and probe from there. The tools include the ability to turn a layer of points near a route (the river reaches) into "point event" descriptors, which name the route (the reach) and the distance from the beginning of the route. That's exactly what you want. Moreover, these tools allow for a user-settable "tolerance": the points do not have to lie exactly on the routes.

I've never tried this but you might consider treating this as a reverse geocoding problem. You would do this by to creating an address locator for you rivers, treating the measure as the From and To address. 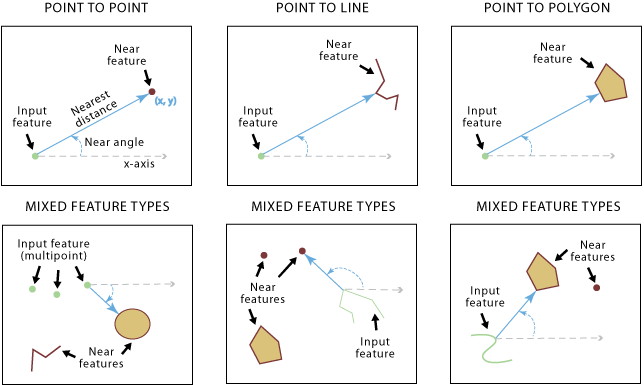 The attribute DistanceAlongCurve will give you what you search. But only for one of the river.

This tool takes in network ( You have to have Network Analyst) and points. After applying tool you end up having t value (value between 0 and 1 ) as PosAlong. Values are stored in input point table. Since 0 is start point of the polyline and 1 is end point you need to multiply it with polyline length. You also have SourceOID which is polyline id in same table.

0
Get measurement values from point along the route Arcmap
10
Get a point on a polyline from end points given distance along poly line
10
How to reverse geocode with ArcMap?
4
Measure feature by tracing
3
Measuring Continuous Distance of GPS track in ArcGIS Desktop
4
Measuring distance between discharge point, along river, until next intersection with another river?
2
Find the point distance along a streams polyline?
1
Sorting by row already pre-selected polygons by location by line?
0
Assigning point order (traffic signals) based on location on lines (bus routes) in another layer using ArcMap