How to delimit hinterland boundaries among multiple city centers?

I have multiple centers. I need to create a buffer-like irregular boundary to delimit adjacent cities. And how do i illustrate the influence among non-adjacent cities?

Is there any tools that I can use in ArcGIS 10 to do this?

Raster calculations are quite effective for such calculations, especially when you have travel time data.

The inputs are rasters of distance to the cities, one raster per city. For example, if you're using Euclidean distance, first compute the Euclidean distance grid for each city. Otherwise, compute the "distance" in any way you can, maybe using CostDistance or perhaps rasterizing a network travel time calculation.

Comments indicate this may be a big problem: 2300 or so centers, perhaps covering a huge (country-wide?) area, thereby requiring a large grid. Don't try this with Spatial Analyst: as a general-purpose raster GIS, it's too slow.

Here is an example in R involving one-tenth as many centers on a 1000 by 1667 grid. It took ten seconds to compute. (That's still a little slow, but it's at least an order of magnitude faster than it could be done in ArcGIS 10.x.) 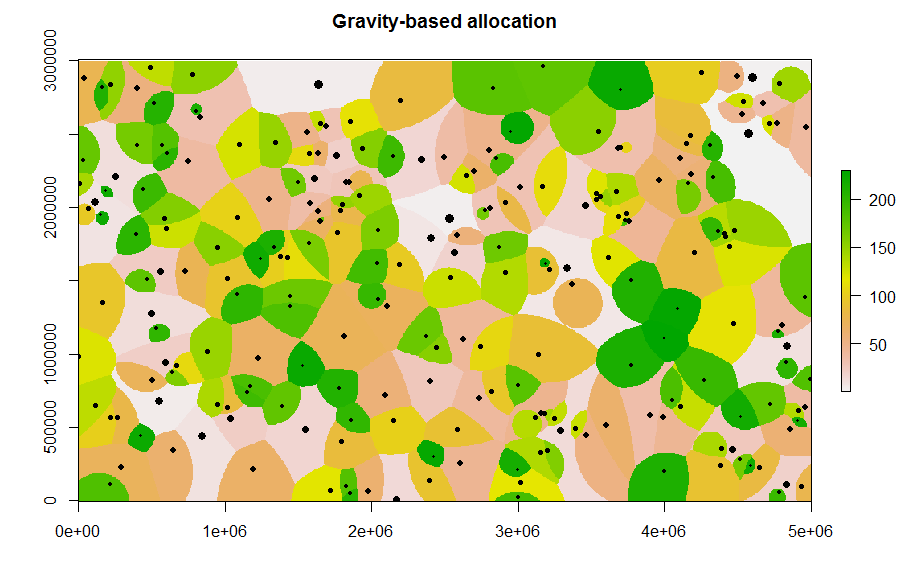 The numbers on this map identify the centers, using whole values from 1 through 230. The black dots show the locations of those centers (with areas in proportion to their populations). Because this is based on Euclidean distance, the boundaries among "territories" are all portions of circular arcs.

The calculation proceeds by establishing two grids--one for the maximum "gravity" seen so far in each cell and another for the current "owner" of that cell--and computing a new grid for each center in turn. It identifies all cells where the new center's "gravity" exceeds the current maximum and updates the [gravity] grid with the new center's value and the [owner] grid with the identifier of the new owner.

To achieve these moderately quick speeds, the algorithm needs RAM to store three grids at once: [gravity], [owner], and the values for each center in turn (which are re-used for each center). Assuming 16 bytes per value (double precision with some R overhead), the calculation on 10,000 by 16,667 grid would require 8 GB, which I confirmed with a test. (That would cover the entire continental US at a 300 meter resolution.) At this resolution the calculation takes 5 seconds per center. Extrapolating to 2300 centers still gives three hours.

Be prepared for counter-intuitive results. (I'm not saying they will be wrong, but they might be surprising.) For instance, when just two cities are involved, the area associated with the smaller city will be a perfect disk: but it won't be centered on the city itself. It will be surrounded an (infinite) area associated with the larger city. That means that a plurality of people living sufficiently far away on the far side of the small city are predicted to travel to the large city--even when that involves passing right through the small city.

Here is the R code used to produce the example. To use it in practice you would want to read the center coordinates (perhaps from a shapefile) and, afterwards, write the allocation grid to disk for further processing and better mapping. Those straightforward procedures are illustrated (with working code) on other R-based threads here.

Thanks to whuber. I found there is an existing module called -- Huff's Equal Probability Trade Areas (Business Analyst) can solve the problem! http://help.arcgis.com/en/arcgisdesktop/10.0/help/index.html#/How_Huff_s_Equal_Probability_Trade_Areas_Business_Analyst_works/00mm00000060000000/

Not the answer you're looking for? Browse other questions tagged arcgis-10.0 arcgis-desktop vector buffer or ask your own question.

4
How to create fixed length (and width) buffer around a polyline in ArcMap 10?
1
Calculating distances between points two feature datasets
1
Why the Select By Location analysis calculates distance in a wrong way?
3
Making multiple buffer, one with field values, one with a fixed value
2
Finding points which fall 20 miles or beyond city boundary using MapInfo?
0
How to take number of states crossed into consideration while calculating the least cost path between two cities?
2
Create a continuous raster buffer for polyline
4
Buffering with obstacles