I'm not a GIS professional so I hope I use the correct wording, at least I hope you understand my question.

Let's say there are five polygons in the feature A. In the shapefile there are more features. In feature A two polygons from the five existing are intersecting. I want to merge the two so overlapping lines will be deleted and the result is one polygon.

So far I found only functions to merge objects (features?), merge shapefiles, and so on.

Is there a function MERGE-SELECTED-POLYGONS?

There's a couple of ways of going about this but you probably want to dissolve the features (Vector->Geoprocessing Tools->Dissolve). With dissolve you don't need to select anything first as it is all done from the attributes. So, let's say you have a field called 'Type' (for example). Then in your example your polygons would all be type 'A' (and you could have some other polygons of type 'B' which you don't want to join with ones of type 'A'). If you select the 'Type' field (or other appropriate attribute in your case) as the attribute to dissolve on then all features of the same type will join together (internal boundaries will be dropped). This may well result in a multipolygon (a single feature which has more than one part, like an archepelago), which might or might not be acceptable. If it is undesirable then simply split the feature up into its constituent polygons by using Vector->Geometry Tools->Multipart to Singlepart.

The alternative is to buffer your polygons by zero, but this probably will join polygons of different types together where you don't want it to happen, so dissolve (optionally follwed by multipart to single part) is safer.

I'm not sure why it takes so damn long, but you can dissolve everything in your layer via the "--Dissolve all--" option. Adding a spatial index or something might help I dunno but this option takes forever running inside of qgis 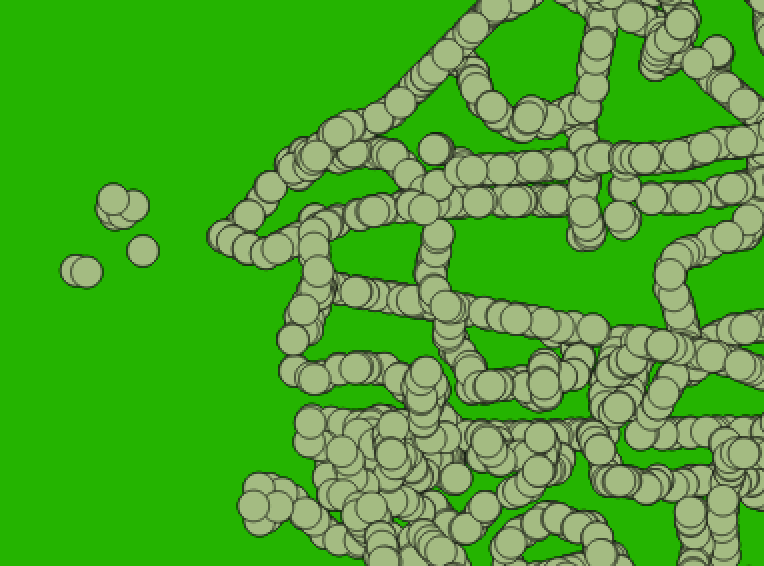 after (10 minutes later on a very fast mac): 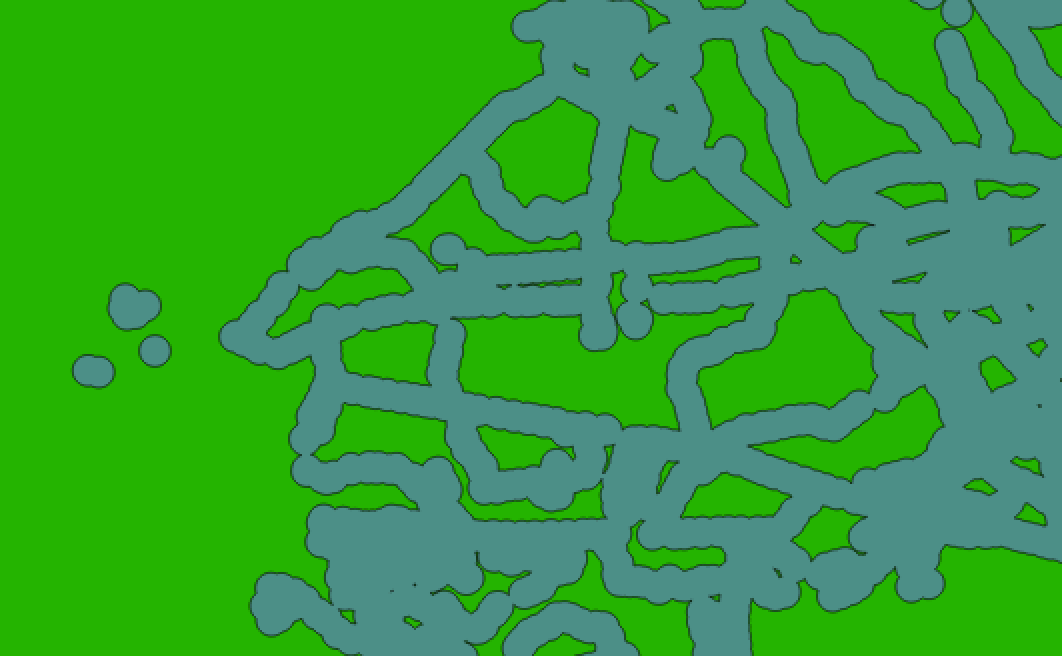 And to answer your question about just wanting to merge selected features, yeah. First select your features, then check the box asking about if you only want to use selected features. Its a pretty standard QGis feature pattern (also included is some annotation on the "--Dissolve all--" option which is what I used): 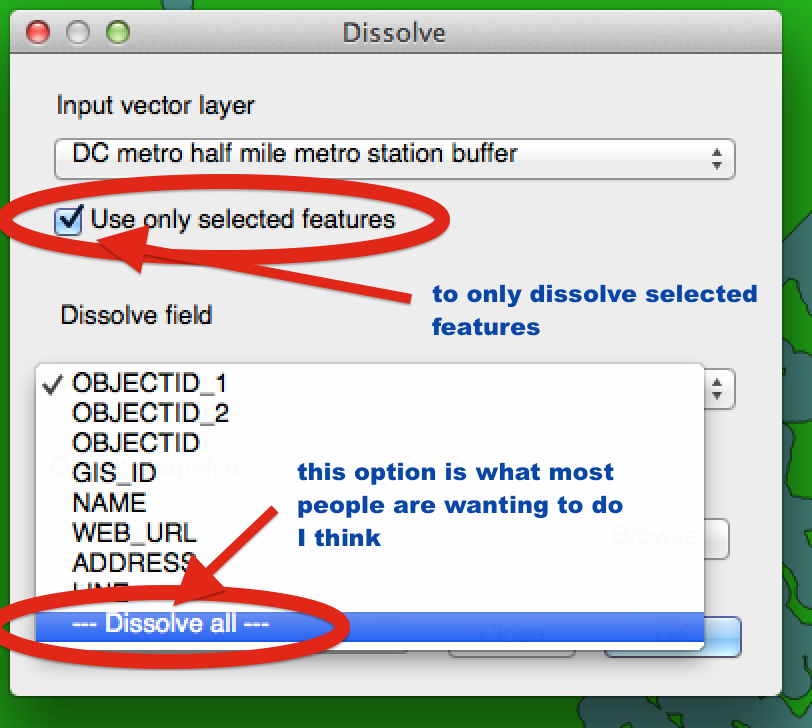 I am trying to do the same as you in QGIS 2.14.1 and I am also having trouble. The native "dissolve" included in QGIS didn't work for me. The way that worked for me was using the GRASS function:

I hope it helps someone.

Im using QGIS 3.14. I found the GDAL Dissolve tool to be more feature rich than that standard QGIS Dissolve tool. It allowed me to choose the Dissolve Field, choose the geometry name but also, 'Produce one feature for each geometry....' which essentially performed a SinglePart to MultiPart function. 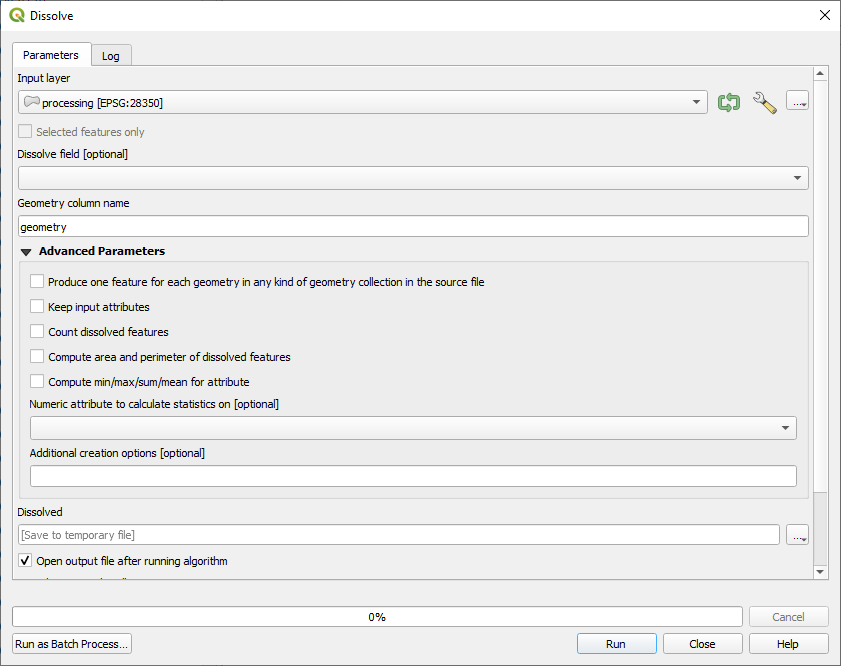 Not the answer you're looking for? Browse other questions tagged qgis polygon intersection merge or ask your own question.

0
Merging multiple small overlapping polygons into one
0
QGIS dissolves all different shapes into one feature instead of multiple features
5
Deleting overlapping inside same polygon using QGIS?
3
Dissolve adjacent parts of multipolygon into a single Polygon

8
Merge Spatially Coincident Features in the Same Feature Class
2
Combining different geometry types into same feature class?
7
Merge intersecting polygons in same table using Postgis
9
Merging spatially separated polygons into one feature in QGIS
6
Merge/join only the lines which are snapped to vertices in QGIS
0
Splitting feature into layers which are overlapped in same layer in QGIS
2
Merge several polygons/features into one continuous area not working