I'm stumped here. I've seen this error in other posts but not quite in the same context. I'm trying to run the arcpy.management.CreateRelationshipClass() tool in ArcGIS 10.0. Absolutely everything I've tried throws the 000840 error. I ultimately want to run the tool from a Python script, but for now I'm trying in the Python window in ArcMap. Here's my code:

I tried \\ instead of / in the pathnames, I tried to name the directory temp.gdb instead of temp, I ran arcpy.ValidateFieldName(), I tried absolute paths, I've tried a bunch of stuff that hasn't worked.

An even stranger thing to me is, is that I'm getting the same error even when I try to run the tool from ArcToolbox > Create Relationship Class: 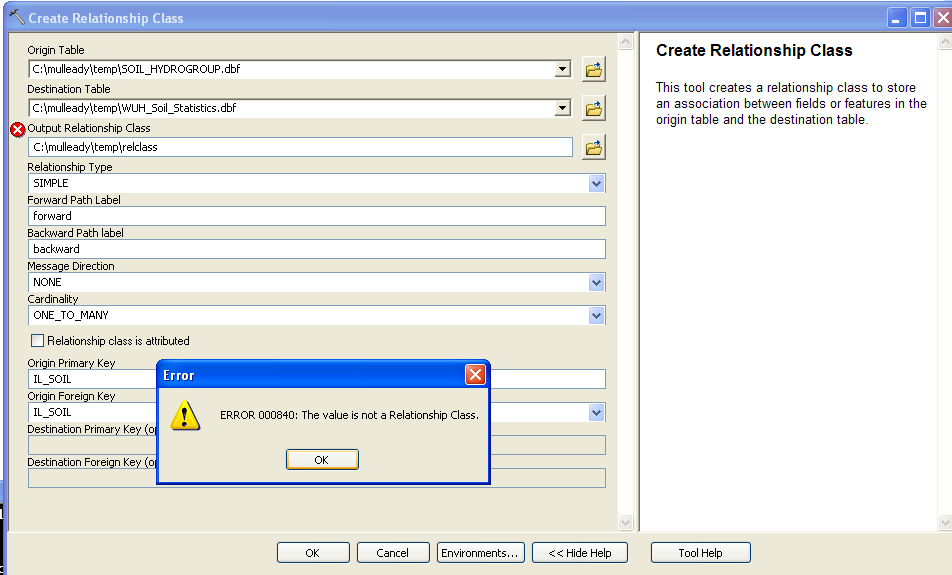 I created a file geodatabase and copied my two .dbf files into it. Now when I try to create a relationship class I get this error. I changed my workspace and scratch workspace to the path of the fgbd folder. What am I doing wrong now? 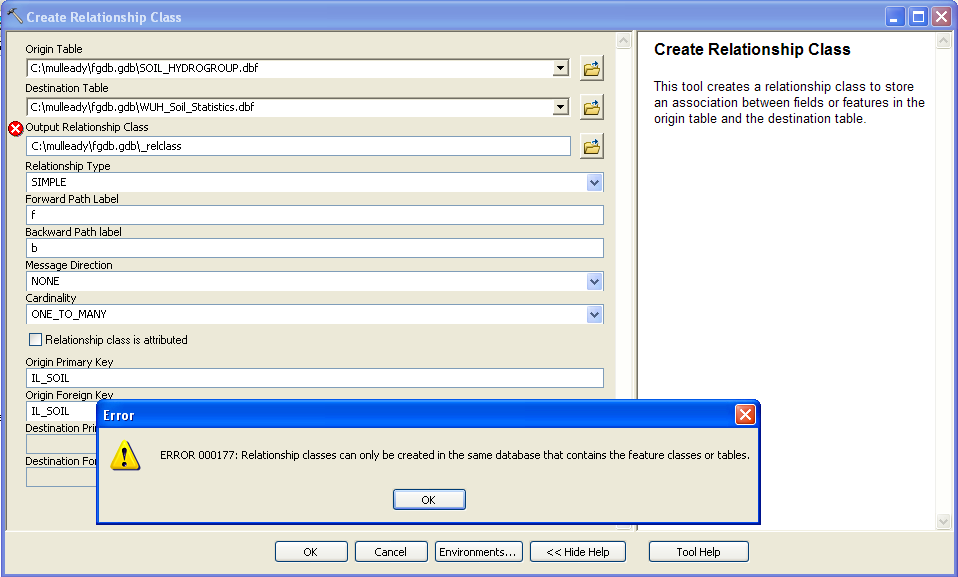 It looks like you're still using a path for the relationship class name, that should only be the name you want for the relationship. Also, if you copied the .dbf tables into your file geodatabase they should not have .dbf at the end of the name. I think this may be confusing ArcGIS. When you have tables in the geodatabase they do not need a file extension at the end of their name. Make sure you are using the browse buttons to select your inputs when you try this again. If you do have the .dbf at the end of your tables in your geodatabase the. You should rename them in ArcCatalog and drop the file extensions.

Not the answer you're looking for? Browse other questions tagged arcgis-desktop arcpy arcgis-10.0 relationship-class error-000840 or ask your own question.

3
How to create Relationship Classes successfully
3
Copy two datasets that particpate in the same relationship class
2
Accessing multiple shapefiles in folder using Python and ArcGIS for Desktop?
0
Error 000177: Failed to create relationship class in Python
1
Using arcpy.MakeFeatureLayer_management on Shapefile and Feature Class
0
Compress - ERROR 000837: The workspace is not the correct workspace type
0
SelectLayerByLocation keeps giving error 000840: The value is not Boolean
4
FME Error when writing to relationship class in ArcSDE Geodatabase writer type
1
arcpy doesn't save output from “Generate Points Along Lines” to “in_memory”