I have a feature class of line-based ellipses generated by the Table to Ellipse tool that looks like this: 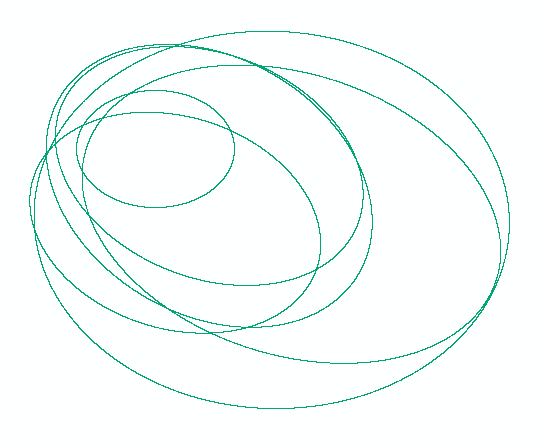 What I want is polygons of the individual ellipses, however tools like Feature to Polygon will create a polygon for every intersection.

My solution to this right now is a Search Cursor in Python that makes a layer from each line ellipse and then runs the Feature to Polygon tool on that layer. This is extremely slow and means I have a feature dataset with hundreds (soon to be thousands) of individual polygon feature classes in it instead of one file.

I saw from this question that there is a Python package, Shapely, that might run much faster than the arcpy tool in a loop. I can't believe, however, that there isn't some way to do this in ArcGIS. Can anyone think of a better solution?

Instead of using Feature to Polygon multiple times, you could use your SearchCursor to read the vertices of each ellipse and then create a polygon from the vertices.

If you don't need to maintain highly accurate output polygons, I recommend that you run generalize on your input before proceeding. I made a test shapefile of 25 ellipses with major,minor axes of 50,150. Each ellipse had over 21,000 vertices. Run time was 61 seconds. Using generalize set to 1 inch, the vertice count was reduced to 70 and run time was .71 seconds. The file size was also reduced from 7.8MB to 55KB.

If you are running this on thousands of ellipses that are expansive, run time can easily approach a few hours and you'll end up with a potentially very large output. Granted, if you are making ellipses in the first place, you probably want highly accurate (and vertex-dense) output polygons.

Not the answer you're looking for? Browse other questions tagged arcpy arcgis-10.1 polygon-creation shapely or ask your own question.