I have to animate a map of Europe (31 countries) which contains three separate vector layers:

The first layer is a simple map (with just the political boundaries) of Europe with 31 countries (each country being a distinct feature). This is a colour-coded map with 4 shades of gray, depending on how much energy a country can store during an hour (dark gray indicating the highest amount of stored energy, white the lowest).

The second layer is a collection of 31 circles (one over every country) with the size of each circle being proportional to the amount of energy produced during an hour. Each circle is a separate feature.

The third layer consists of transmission lines drawn between the circles. The width of each line indicates the amount of energy it transmits during an hour. There are 50+ lines in this layer and each line is a distinct feature.

Hence on a given map, these 3 layers (the circle layer superimposed on the storage layer, and the line layer superimposed on the circle layer) represent one picture of the energy stored, produced and transmitted in a particular hourly time-step. Using MATLAB, I can generate these layers for successive time-steps and I would like to animate those pictures for a period of 2 days (hence 48 pictures in total). Can you please guide me as to how this can be done most efficiently? Should I merge the three types of vector layers into one layer, e.g., for the first hour (and append the first time-stamp to them), then do the same for the next three layers for the second hour (and append the second time-stamp), and so on, and then finally merge all the 48 pictures together? Could there be an easier and less time-consuming way to animate those pictures?

I'm sorry if this is a basic question but this is the first time I am using QGIS Time Manager.

For each layer you want to animate you need to have a field with the stored time stamps. Time formats:

Load and prepare your layers in QGIS, open Time Manager plugin, hit 'Settings' button and add the layers you want to animate: 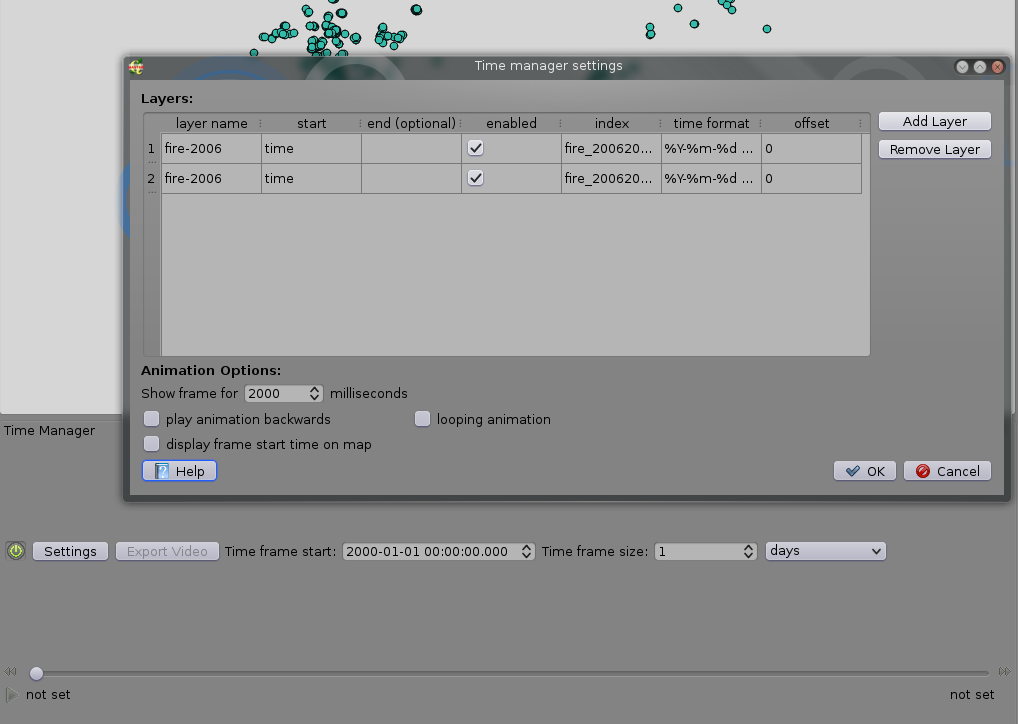 Adjust other animation settings and hit "Export video" button. It will generate a bunch of pictures. Then use ffmpeg tools in console to create video itself. Here is example command that creates .flv file from .png files:

Not the answer you're looking for? Browse other questions tagged qgis timemanager or ask your own question.